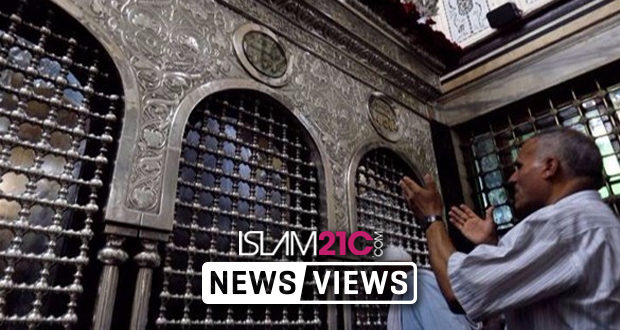 Egyptian shrine-goers experience the shock of their lifetimes

For 40 years, Bedouin tribes in Egypt would frequently visit a shrine, with the belief that it contained the remains of ‘Saint Sidi Abū Srīʿ’ (أبو سريع). The tribes would present vows and offerings to the shrine allegedly amounting to approximately one million Egyptian pounds annually. However, a recent dispute has revealed a startling discovery.

In the Suez Governorate of Egypt, two tribes in the town of Ain Sokhna, fell into an argument over who ought to have the right over the shrine—and no doubt a share of the fortune. The residents of Suez were about to experience the shock of their lifetimes when they learnt that what was buried inside the shrine was not the remains of a Saint but in fact the decayed head of a calf.[1]

The report was broadcasted by ‘al-Assema’,[2] and received the attention of social media commentators in Egypt and abroad, many of whom held that this reality reinforces the teachings of the Qur’ān and the Prophet Mohammad (sall Allāhu ʿalayhi wa sallam) whom firmly prohibited the imitation of Jewish and Christian traditions of venerating graves.

“Alhamdullilāh for the blessing of Tawhīd [singling Allāh in worship and devotion]. Forty years and the lay in Sinai would seek blessings from the shrine of Abu Srīʿ, giving it offerings and vows exceeding a million Egyptian pounds annually…”[3]

Moreover, many others considered this discovery as a reminder for individuals who venerate graves or claim that certain saints ought to be invoked and beseeched besides or as well as Allāh (subḥānahu wa taʿālā).

Venerating the graves of those deemed to be relatives of the Prophet (sall Allāhu ʿalayhi wa sallam) is widespread in Egypt, not least in Cairo, where a Maqām of Lady Zaynab, attributed to the daughter of Alī (rady Allāhu ʿanhu) is venerated.

The Suez findings raise speculation as to whom the rest of the shrines in Egypt accommodate. Across other regions of the Arab world, several graves are attributed to the same ‘Prophet’ or ‘Saint’, each attracting its own share of visitors and duped tourists.

Out of Allāh’s mercy, there is no grave that is known with certainty to belong to a prophet, other than that of the Prophet Muhammad (sall Allāhu ʿalayhi wa sallam)—in Syria alone there are three graves attributed to the same prophet![4] That the only Prophet whose grave is known is the Final Prophet who explicitly issued stern warnings against the veneration of graves, is a protective barrier against both the transgression of Allāh’s right to be worshipped and prayed to alone, and the exploitation of lay people by owners of shrines asking for sacrifices and ‘offerings’.

This finding is a reminder to protect the unlearned from invoking anyone besides their creator and to protect their intellects and wealth from exploitation by those who arouse folklore and create legendary tales to appropriate people’s wealth.

And I did not create the jinn and mankind except to worship Me.

I do not want from them any provision, nor do I want them to feed Me.[5]

2018-01-21
+Editor
Previous: US calls on Turkey to stand down amidst Assad’s threats against Turkey
Next: When the West Glorified Islam