EID MUBARAK!
Home / News / Erdogan on Trump’s Mideast plan: “When will you raise your voice?” 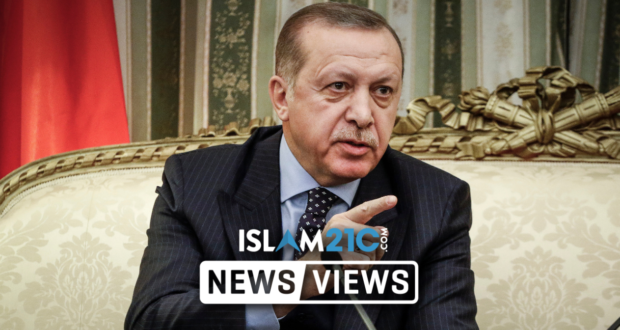 Erdogan on Trump’s Mideast plan: “When will you raise your voice?”

US President Donald Trump declared his Middle East plan that will supposedly “resolve” and end the decades-long conflict in the region. [1] The plan was released on Tuesday at the White House alongside Prime Minister Netanyahu but with no Palestinian officials present.

During the 5th Anatolian Media Awards ceremony, Turkish President Recep Tayyip Erdogan said that “Jerusalem is not for sale.” He condemned the so-called “Deal of the Century”, emphasising that “Jerusalem is a red line for us.” [2]

President Trump has referred to Jerusalem as “Israel’s” so-called “undivided capital.” The professed “peace” plan dissolves any previous UN resolutions on the Palestinian issue and according to the Middle East Monitor proposes giving “Israel” almost everything that they have been demanding for.

Erdogan slammed Trump’s so-called “deal of the century” and reiterated his strong opposition to it, saying that it ignores the rights of Palestinians’ and instead aims to legitimise Israel’s illegal occupation. Erdogan said:

“Jerusalem is sacred for Muslims and Trump’s so-called peace plan proposing to leave Jerusalem to Israel is never acceptable,” [3]

Palestinian factions have come together with Hamas to denounce the deal stating that the “deal isn’t worth the paper it’s written on and Jerusalem will remain for Palestinians.”

Erdogan also urged Muslim countries to raise their voices for Jerusalem and the protection of the Palestinian people. [4] During a meeting of provincial heads of the ruling Justice and Development Party (AK Party), Erdogan said:

“We will never recognize or accept (Trump’s so-called “Deal of the Century”) as it aims to annex occupied Palestinian lands,”

He further added that leaving the fate of Jerusalem and Palestinians entirely in the “bloody claws” of “Israel” will be “the greatest evil in all humanity.”

“If we cannot protect the Al Aqsa Mosque, we will not be able to prevent those who turn to the Kaaba as a target in the future. Jerusalem is our red line for this reason,”

Erdogan told his party members in Ankara that:

“Some Arab countries that support such a plan commit treason against Jerusalem, as well as against their own people, and more importantly, against all humanity,”

Erdogan asked Muslim countries “When will you raise your voice?” this included Saudi Arabia, which he pointed out stating that they had said nothing about the issue, although the situation is a matter of concern for all Muslims.

“Saudi Arabia in particular, you are silent. When will you speak? You look at Oman, Bahrain and likewise Abu Dhabi,” [5]

“Shame on you! Shame on you! How will those hands that applaud (the Trump plan) give an account of this treasonous step?”