Erdogan ‘Ottoman slaps’ the opposition with a landslide victory 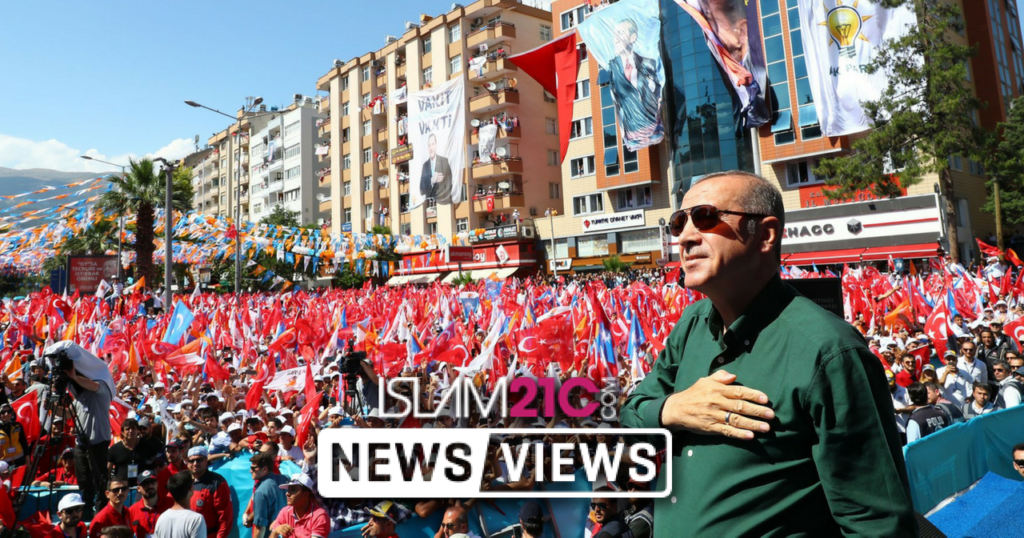 On Sunday, millions of Turks headed to the polls for the country’s elections where six candidates went head to head as well as eight political parties. The elections were fast tracked 18 months ahead of their original scheduled date following the parliamentary approval of a joint proposal by the AK Party and the Nationalist Movement Party (MHP). [1]

The country’s voting began at 0500 GMT (8:00am local time) and ended at 1400 GMT (5:00pm local time). More than 56 million registered voters were eligible to cast their vote in these elections with over 180 thousand ballot boxes across the country. [2]

Voter turnout in the presidential elections was an astounding 86.82 percent and 87 percent in the parliamentary election. [3] Commenting on this Islam21c Middle East Editor, Ahmed Hammuda said:

“Many have challenged European governments to achieve a turnout near what Turkey achieves. This shows us that the Turks are more engaged and confident in their democracy than any other nation in the western hemisphere”.

President Erdoğan obtained 52.7% of the presidential votes to become the country’s first executive president. His alliance, the People’s Alliance obtained 57% of seats in Parliament.

In the run up to the elections many prominent figures, politicians, scholars and academics spoke in support of President Erdoğan and made duʿā that Allāh grants him and his party victory. These included the likes of Sheikh Muhammad al-Hassan Walid al-Dido al-Shanqītī who is the President of the Center for the Development of Scholars and Sheikh Dr. Haitham al-Haddad from the Islamic Council of Europe.

People across some of the most devastated regions in the world also voiced their support for Erdoğan. These included the people of Palestine, Syria, Iraq and Libya amongst many other regions across the world who see Turkey as a beacon of hope at a time of chaos and volatility. Billboards were erected in many Middle Eastern countries in support of Erdoğan whilst millions also took to social media to voice their support and pray for his success. [4]

Why are Muslims celebrating Erdoğan’s victory?

Turkey has witnessed drastic changes ever since the abolishment of the caliphate and the rise of the Zionist-sponsored, secularist Mustafa Kemal “Atatürk”. [5] “Atatürk” came to power imposing decades of secularism on the Turkish people. Turkey endured a staunchly secularised political climate for a number of years but is currently undergoing a remarkable transitional period, in which it is removing itself of some of the tyranny that suffocated it.

In February, the Turkish president Recep Tayyip Erdoğan commented that Turkey should reconsider criminalising adultery and bringing back the ‘adultery law’. During a weekly parliamentary group meeting in Ankara, Erdoğan stated:

Earlier in February, Erdoğan also said that the Republic of Turkey is a continuation of the Ottoman Empire. During a memorial ceremony to mark the anniversary of the death of Ottoman Sultan Abdulhamid II, Erdoğan stated:

Abdullāh b. Salām (May Allāh be pleased with him) reported:

Charity is one of the most essential manifestations of any Islamic country. The above is the founding statement of the Prophetic Islamic state, which shows the great emphasis and direct command the Prophet of Allāh made with regards to humanitarianism and charity.

There is no doubt that despite the atrocities the Ummah is going through, Allāh is showing us rays of light, and glimmers of hope, to keep us optimistic and motivated and to give us the ability to bear the responsibilities He commanded us to bear.

“Allāh has promised those among you who believe, and do righteous good deeds, that He will certainly grant them succession to (the present rulers) in the earth, as He granted it to those before them, and that He will grant them the authority to practise their religion, that which He has chosen for them. And He will surely give them in exchange a safe security after their fear (provided) they (believers) worship Me and do not associate anything (in worship) with Me. But whoever disbelieved after this, they are the Fāsiqūn (rebellious, disobedient to Allāh).” [11]