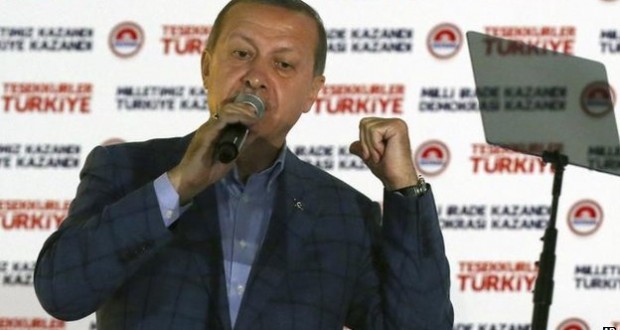 Turkish president Recep Tayyib Erdogan has made western media headlines today for likening the German government’s actions to Nazis. This was in response to Germany blocking several rallies on its soil in the run-up to a referendum happening in Turkey this April. He is reported to have said,[1]

“Your practices are not different from the Nazi practices of the past…I thought it’s been a long time since Germany left [these practices]. We are mistaken.”

It has come after federal authorities in two German states withdrew permission to Turkish residents for political rallies. The authorities reported justified their actions with ‘security concerns’.

There were calls for a general ban or his minister campaigning in Germany last week, however Angela Merkel rejected these citing ‘free speech’. However the individual bans on political rallies for Turks still endures.

The cancellation of rallies provoked the Turkish government to accuse the German government of working against their campaign during the referendum, and stern words from Erdogan.

“You will lecture us about democracy and then you will no let this country’s ministers speak there.”

Merkel called Turkey’s prime minister Binali Yildirim yesterday to try to defuse the argument, and they are due to meet on Wednesday.

The relationship between the two countries has been put under acute stress since Deniz Yucel was arrested last week, a German journalist accused of being a German spy and representative of the proscribed group PKK. He awaits trial after being handed over to the authorities following a month of protection in the German consulate in Istanbul, provoking more criticism from Erdogan.[2]

Whilst western media outlets are routinely portraying Erdogan as unreasonable or in an otherwise negative light, others are praising him for his aggressive and stern attitude towards other nations potentially interfering with Turkish sovereignty.