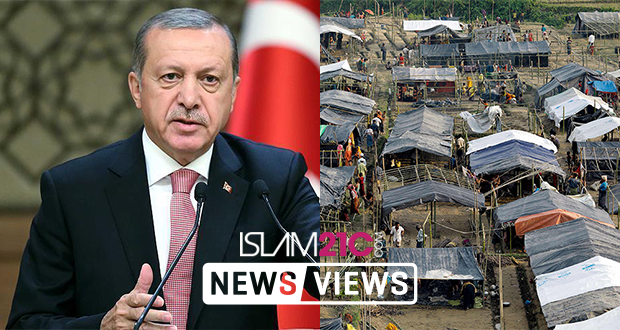 The Turkish President Recep Tayyip Erdoğan has stated that, his country will attempt to build more liveable camps for those who are fleeing persecution to Bangladesh from the nearby Rakhine state in Myanmar. Speaking to journalists at the Istanbul’s Ataturk Airport before leaving to Astana for an OIC summit, Erdoğan said that there has been ongoing multilateral diplomacy amidst the crisis in Myanmar. Erdoğan stated that the current camps in Bangladesh are not liveable.

The Turkish President expressed hope that the upcoming summit of the Organization of Islamic Cooperation (OIC) would make the Muslim world’s voice louder regarding violence in Myanmar. He aims to garner more support to put an end to the reckless genocide on the Rohingyas. “Hopefully we will make progress toward ending bloodshed and violence during this summit,” Erdoğan said. [1]

Many of the refugees “are still living on the streets” Khatun – a refugee from Rohingya – told Anadolu Agency. “We have been left incapable. We do not have the possibility of cooking even a little food. We could not find a rag to cover ourselves,” she added. [2]

“If Bangladesh authorities allocate an area, we want to build more liveable tent camps [for Rohingya refugees] using our experience,” said Recep Tayyip Erdoğan. Turkey could share its know-how building camps with better facilities as the country has hosted around 3 million Syrian refugees for over six years, he added.

“TIKA has distributed 1,000 tons of humanitarian aid. In the second phase, we are planning to distribute 10,000 tons of food, medicine and clothes,” President Erdoğan said.

Turkey’s non-governmental organisations in the field

There has been additional aid coming from non-governmental organisations in Turkey to those taking refuge in Bangladesh.

The Turkish Red Crescent has distributed aid worth $2.5 million for Rohingya Muslims in Bangladesh and distributed 2,000 food packages during the visit of the Turkish first lady, Bora Tumer, the head of the group’s Bangladesh delegation, told Anadolu Agency. He added that they distributed sacrificed meat to 22,000 families in coordination with Bangladesh’s Red Crescent.

“Each package is meant to supply a family’s needs for two weeks,” Tumer said.

The Diyanet Foundation (TDV), the charity arm of Turkey’s Religious Affairs Directorate, is set to distribute food packages worth of $150,000 to 3,000 families next week, in addition to other aid.

The aid targets more than 140,000 Rohingya Muslims in refugee camps in Bangladesh, including in Kutupalong and Balu Khali.

The foundation is also planning to distribute $650,000 worth of packages of clothing and hygienic supplies following its field work.

For five years the foundation has been involved in distributing humanitarian aid, including during Muslim holy months, as well as education activities for Rakhine Muslims.

The value of the aid to date totals almost 12 million Turkish liras ($3.5 million).

Turkey was rated the top provider of humanitarian aid on a percentage of GDP basis, last year.