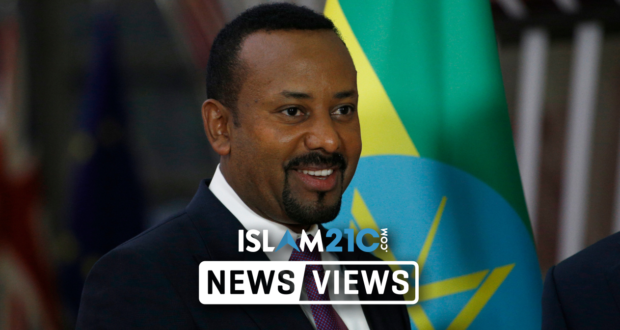 African’s youngest leader, Abiy Ahmed, has been announced as the winner of the 100th Nobel Peace Prize for his efforts in making peace last year with neighbouring Eritrea. [1]

He will receive the award, worth nine million Swedish crown, (approximately equivalent to £730,00) in December for his works to “achieve peace and internal cooperation” while remaining determined to tackle outstanding challenges.

Mr. Abiy said he was “humbled and thrilled” following the news of his success.

In a phone call with Olav Njølstad, the Secretary of the Norwegian Nobel committee, Abiy said:

“Thank you very much. It is a prize given to Africa, given to Ethiopia and I can imagine how the rest of Africa’s leaders will take it positively to work on [the] peace-building process on our continent.”

Dubbed “the man changing Ethiopia,” Abiy was awarded the prestigious prize “for his efforts to achieve peace and international cooperation” and more specifically, “for his decisive initiative to resolve the board conflict with neighbouring Eritrea.” [2]

“The prize is also meant to recognise all the stakeholders working for peace and reconciliation in Ethiopia and in the East and Northeast African regions.” [3]

The Chair of the Norwegian Nobel Committee, Berit Reiss-Andersen acknowledged that Abiy had “reached out his hand” to initiate a peace process with Eritrea, restoring ties that had been frozen since a 1998-2000 border, giving many Ethiopians a “better life and brighter future.”

The Prime Minister’s office said the award was attributed “to the ideals of unity, cooperation and mutual coexistence that the Prime Minister has been consistently championing.”

Furthermore, the Prime Minister had introduced political and economic adjustments in Ethiopia, which included granting amnesty to thousands of political prisoners and dismissing many high-profile figures, many of whom were suspected to guilty of corruption.

Mr. Abiy was chosen over the likes of teenage climate activist Greta Thunberg, and New Zealand Prime Minister Jacinda Ardern, who made the headlines for her remarkable empathy during the Christchurch Mosque shootings earlier this year.

Many fell in support of Mr. Abiy, including many of his fellow state leaders in Africa, who acknowledged this pivotal win, such as African Union chief Moussa Faki, and Liberian President George Weah, both tweeting their praise of Abiy following the announcement.

It is with great pride that I congratulate Ethiopian PM @AbiyAhmedAli on being the 100th recipient of the Nobel Peace Prize for his historic peacebuiding efforts that have given the world hope at a time it needs servant leadership more than ever. pic.twitter.com/9I17iAZ4ch

@PMEthiopia I hereby join the rest of Africa and the world at large in celebrating with the great people of Ethiopia and Prime Minister Abiy Ahmed for winning the 2019 Nobel Peace Prize Award. The Government & People of Liberia extend warmest felicitations for this noble feat. pic.twitter.com/vbZqyfUuJK

Ghana’s President also expressed his support, adding that his win was “a reminder to us all that peace is one of the most critical ingredients needed to make Africa successful.”

Warm congratulations to Ethiopian Prime Minister, @AbiyAhmedAli, on winning this year’s Nobel Peace Prize, for his efforts at achieving peace and resolving the border conflict with Eritrea. 1/2

Earlier this year, Mr. Abiy made the headlines during a speech to Ethiopians in Washington, whereby he criticised the UAE for conflicts in Algeria, Yemen, and Egypt, before rejecting an offer to help establish an Islamic centre in Ethiopia by Abu Dhabi Crown Prince Sheikh Mohammed bin Zayed, a man he claimed has “lost” his religion.

“The Islam that does not look like true Islam has begun spreading amongst you, and you have forgotten peace and how to forgive.”