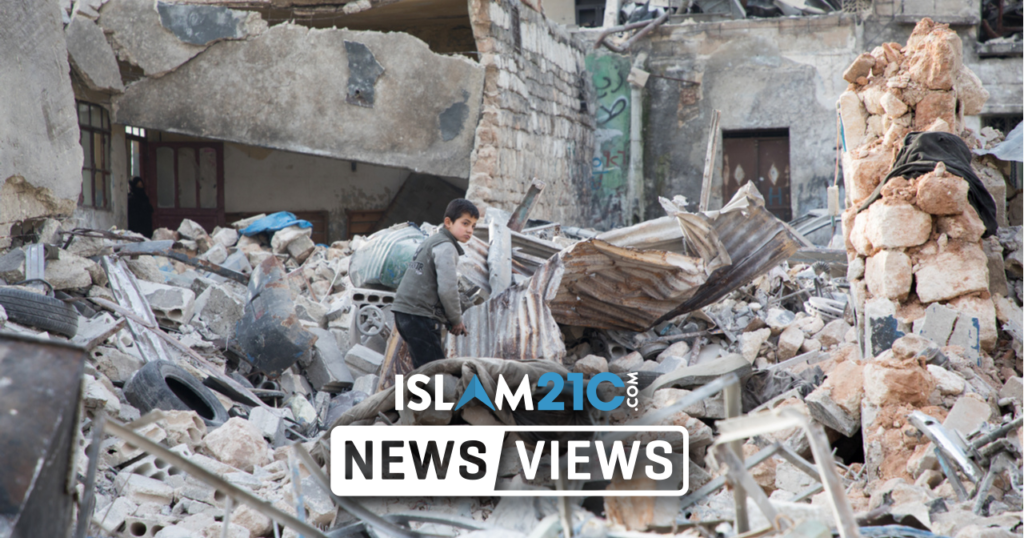 Over the past three months, Idlib province has been under sustained assault as the Assad regime retakes town after town. Supported by Russian airpower and re-enforced by Iranian militia, the attacks on Idlib have only intensified over the past week, resulting in nearly 700,000 civilians fleeing north to the border with Turkey.

According to the UN, most of those fleeing are women and children, with 100,000 expelled from their homes due to bombing in the last week alone. The UN has stated that the Russian-backed attacks have caused a “major loss of civilian life.”[1]

These include women like “Sara” (not her real name), who spoke on the condition of anonymity to Al-Jazeera. Sara is a widow and mother of five who is originally from Saraqeb. She fled during the Assad offensive to re-take this key rebel town. Sara made it to the Turkish border through walking and depending on lifts from other desperate but kind Syrians. This widow, with her five children in tow, made it to the Turkish border. However, rather than be greeted with solace, food, and shelter once she reached the border, she was met with the bitterly cold reality that the world has turned its back on Syria.

Not able to find any shelter, Sara tells how she slept under a tree, huddled with her children as temperatures plunged below freezing:

“I just put some mats over the mud under a tree and that was where we’re going to sleep.”[2]

Sara was fortunate enough to find her sister and currently shares accommodation with her, which costs the family $150 a month – an expense the family can barely afford. This also hints at another killer in Syria: inflation.

Whether this is a case of profiteering or inflation, this case highlights the fact that the price of basic necessities has skyrocketed in Syria. A bag of bread last year cost 15 lira but now sells for 450 lira. This astronomical rate of inflation has had an impact on all essential provisions, including gas, which currently costs 13,500 liras, thus making cooking prohibitively expensive. Instead, families scavenge for things to burn in order to cook and feed themselves. Drinking water is scarce, whilst vegetables and fruits are only the stuff of dreams. For charities remaining in Syria, this rise in costs compounds the challenge in what were already difficult circumstances. Sara summed up the catastrophic situation by saying:

“I keep going only for the sake of my children. The situation is so bad, it is like Judgement Day.”[3]

Saraqeb, Sara’s hometown, is strategically important as the M4 and M5 highway meet within it. The M5 highway connects Aleppo to the capital Damascus and continues south to the Jordanian border. Much of Assad’s recent strategy has been to retake these key highways. However, in doing so, Assad and his Russian backers have been in flagrant breach of the Astana agreement.

Turkey has warned the Assad regime forces (that are backed by Russia) against continuing its aggression into Idlib. However, these cautions have largely been ignored, with the calculation in Moscow being that Turkey will want to avoid direct confrontation.

Nevertheless, Turkey has sent in re-enforcements to Idlib to shore up the 12 observation posts that were created by the 2018 Astana agreement.

However, Monday saw a significant escalation in hostilities when five Turkish soldiers were killed by Assad forces. Turkey promptly retaliated against dozens of Assad army targets.[4]

Tensions are clearly elevated with what appears to be the highest escalation in the near decade-long conflict between key stakeholders. With relations between Ankara and Moscow strained, perhaps many Syrians taking shelter from the skies or fleeing bombs and tanks will be hoping that Turkey loses patience with Russia.

Turkish officials looking to broker a political resolution would do well to recall the grazing of Grozny during the second Chechen war to better understand what Russia considers to be a peaceful resolution. It is a sobering thought to reflect that in 2003 the UN called Grozny the “most destroyed city on earth.”[5]

“They have followed a “scorched earth” policy. They’ve killed anything alive able to reproduce. They destroyed crops, plants, trees, burned the animals alive and even exhumed the graves of the Muslims and mutilated and burned them too. They appear to be criminals by nature.

“Unfortunately, the whole world is standing watching as a witness to the Syrian massacre. There is no power but from Allāh.”