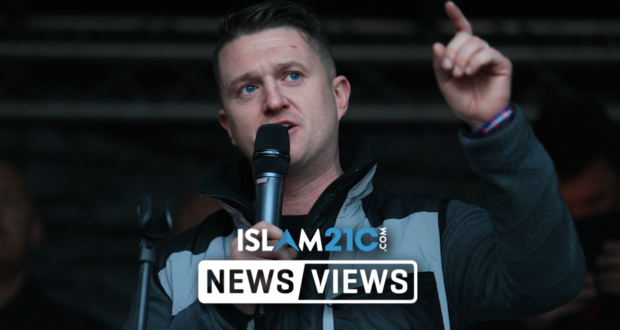 Far-right criminal begs Trump to save him from jail

Tommy Robinson has urged US President Donald Trump to grant him political asylum as he faces jail for breaking a media ban law and being in contempt of court.

The founder of the right-wing ‘extremist’ group, English Defence League (EDL), could face up to two years in prison after a high court last week found him to be in contempt of court. The Islamophobic figure, whose real name is Steven Yaxley-Lennon, appealed the US president, arguing he has no future in the UK.

“I beg Donald Trump, I beg the American government, to look at my case. I need evacuation from this country because dark forces are at work,” Robinson said in a statement on the right-wing conspiracy channel, InfoWars, adding that he would be killed in prison as British prisons are controlled by “jihadi gangs”. [1]

“This is a direct appeal on behalf of my family – we love the United States. I have no future here in Britain.” [1]

InfoWars host and founder, as well as a self-professed ally of Robinson, Alex Jones, said that Trump would be watching the events occurring in the UK and promised Robinson that he would deliver his appeal to the White House.

There has been no comment from the US government on whether they have received a formal request of asylum from Robinson, or whether they would consider one. US politicians have in the past raised what they call ‘concerns’ regarding Robinson’s trial.

High court judges last week found Robinson guilty of breaking a reporting ban on a grooming trial in 2018 by live-streaming the case and attempting to reveal the identities of the defendants. This incident threatened to collapse the case as Robinson had interfered with the course of justice.

Last year Donald Trump Jr, the US president’s son, shared a tweet from a Robinson supporter, adding his own comment in support of Robinson who was jailed last year.

Reason #1776 for the original #brexit. Don’t let America follow in those footsteps. https://t.co/6QLejT61i4

Chris Werleman, a prominent columnist and an activist who fights against Islamophobia, drew on the irony of Robinson’s cowardly appeals for asylum as he himself has railed against asylum seekers and migrants seeking a safer life in the UK.

So, a guy who has built a career demonizing immigrants and refugees suddenly seeks refugee status!https://t.co/3zwBO7jgFs

Robinson founded the EDL in 2009 as an Islamophobic organisation, and members of the group routinely engage in violence during marches and demonstrations. In recent years, he has received the support of Trump and other high officials.

Robinson has also publicly called out against Muslims living in the UK and has led many “mosque invasions” as part of the EDL’s Islamophobic campaign.

The far-right criminal will be sentenced at the Old Bailey in London later this week.

2019-07-09
Muhammad Mussa
Previous: Palestine Expo 2019: a celebration and awareness of the Palestinian cause
Next: Negative portrayals of Muslims have contributed to the rise in Islamophobia, says Muslim Council of Britain