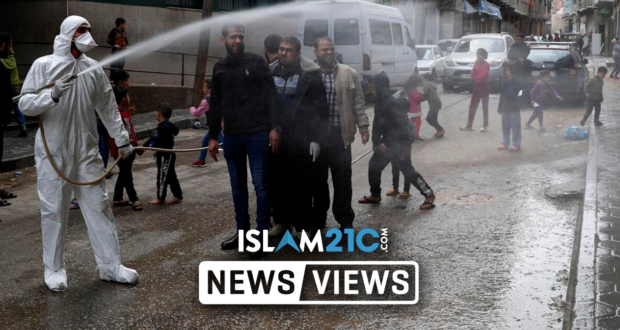 Palestinian officials have announced their first two cases of COVID-19 in the besieged Gaza Strip. The Deputy Health Minister, Youssef Abulreesh, announced that the two Palestinian patients had returned from Pakistan via Gaza’s Rafah border with neighbouring Egypt. The two patients, who showed symptoms of the illness (including a dry cough and a high fever), were placed in quarantine upon their arrival and are now in a field hospital in the border town of Rafah, in the southern Gaza Strip.

Due to the confirmed cases, Abulreesh has urged Gaza’s two million residents to take precautionary measures through social distancing and staying at home in a bid to halt the spread of the virus. Authorities in Gaza have decided to shut down restaurants, cafes, and reception halls. Friday prayers at mosques have also been suspended.

The Coordination of Government Activities in the Territories (COGAT), an Israeli military unit that is responsible for all civilian matter in the occupied territories, have announced that all crossings into Israel from Gaza and the occupied West Bank have been closed. COGAT have added that some exceptions may apply to nurses and health workers, as well as exceptional medical cases. However, many Palestinians say that permits to cross are hard to obtain, even for those with a medical or humanitarian reason.

Authorities in Gaza have introduced quarantine centres in which to place incoming residents. To date, there are 20 designed facilities in Gaza (including hotels, schools, and medical facilities) housing over 1,200 people, according to a report released by Palestinian Authority’s health ministry. These quarantine centres are located in Rafah, Deir al-Balah, and the southern city of Khan Younis. According to the report, around 2,000 other returnees have been self-isolating in their homes, prior to the mandatory quarantine procedure.

Um Mohammed Khalil is one of those who are being quarantined in Rafah. After returning from Egypt, the 49-year-old was amongst the 50 other people who travelled to a school ‘with poor hygiene standards’ – so bad that a single room was shared by seven people.

The first two established cases in Gaza has sparked anxiety and fear among those who have been quarantined. Khalil noted, “We were afraid that among us would be infected people, especially as we have been calling for an improvement in the school.” The worries of what this pandemic may cause is at the forefront of everyone’s mind. “Gaza has endured many wars and crises, but how can it tolerate this pandemic? We are very afraid,” Khalil said.

Amira al-Dremly knew that it would only be a matter of time until the virus made its way to Gaza. Hearing the news that two cases had been tested positive felt like ‘the end of the world’ to her. Amira goes further to explain that their “biggest fear is that the available resources in Gaza are not enough to act as a temporary solution.”

This fear does not come from nowhere. Gaza’s healthcare system is broken and its war-battered residents are especially vulnerable having lived under an Israeli-Egyptian siege for nearly 13 years. The blockade of air, land, and sea has restricted the entry of essential recourses such as medication, healthcare equipment, and building materials.

Gaza has seen three Israeli assaults that have resulted in the destruction of infrastructure, including medical facilities and a power plant. The World Health Organization has warned that Gaza’s healthcare system would not be able to deal with an outbreak, given that hospitals are overstretched and under-resourced.

Ayman al-Halabi, a doctor at the laboratories run by Gaza’s health ministry, said,

“Facing this pandemic is going to be extremely challenging. If the biggest and most powerful countries are struggling, how is Gaza supposed to cope?”

In these times of need, we ask Allāh to provide us ease, to spread mercy around the world, and to grant us patience in these difficult times. Many of us may be feeling very alone and scared about the future, but remember that Allāh is Al-Wakīl, the disposer of affairs. He has promised, “Verily, with every hardship comes ease.”

A believer’s greatest weapon is du’a, so raise your hands to your Lord and remember the whole Ummah in your du’as.

2020-03-22
Sana Mahmood
Previous: Condolences upon the passing of Dr Fuad Nahdi
Next: Take a Moment from COVID-19…