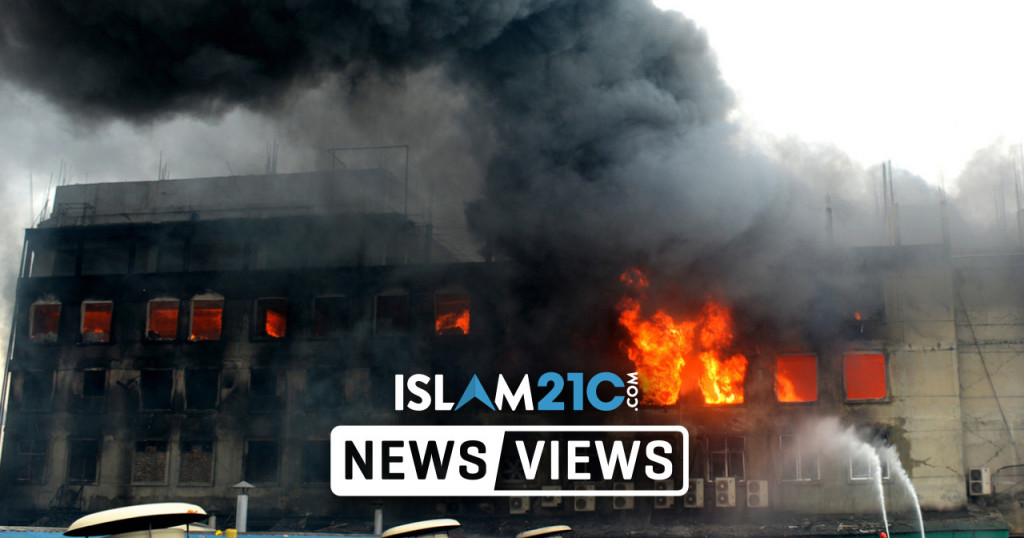 A devastating inferno at a food-processing centre has tragically taken the lives of at least fifty-two workers in Rupganj. The centre is located just an hour’s drive east of the Bangladeshi capital Dhaka. The owner of the factory, along with four of his sons, have all been charged with murder amidst a police investigation into the cause of the fire. The ferocious blaze, which engulfed the five-storey Hashem Foods factory on Thursday evening, is believed to have started as a result of numerous breaches in fire safety regulations. [1] [2]

Children as young as 11 had reportedly been working at the site. Highly flammable chemicals and plastics that were stored in the building only made the blaze worse. Shockingly, police investigating the cause of the fire have discovered that the main entrance to the building had been padlocked, thus preventing many of the occupants from escaping. This meant that people tragically remained trapped inside the building, with many of them eventually dying. Jayedul Alam, who presides as police superintendent for Narayanganj district, said that a number of fatalities were a result of people jumping from the upper levels of the burning factory in a desperate attempt to flee from the inferno.

Concerning the building’s owner and his four sons, Alam relayed to The Associated Press:

“We have arrested them for murder charges…They are in our custody now.” [3]

Emergency services personnel discovered the bodies of 48 people on the third floor alone. They are yet to release figures concerning their recovery efforts in the two uppermost floors.

Bangladesh has suffered a number of health and safety disasters in recent years, with the worst case being that of the Rana Plaza collapse of 2013. 1,134 people were killed when the multi-storey, mixed-use, and structurally faulty building came crashing down in less than 90 seconds. Multiple harrowing accounts were given of people amputating their own limbs in order to free themselves from the rubble. From those who survived, many instantly became jobless, as they were engulfed by the constant fear that such a disaster may very well occur again. This was the case for many workers, as they had only worked for the garment sector throughout their lives.

Since that horrifying accident, there have been widespread calls for action. There have been a number of global initiatives which have garnered the support of multinational corporations. Italian brands Kappa and Benetton, Bonmarche and Primark of the UK, Inditex of Spain, and at least 20 others have pledged to take action to ensure that another accident does not occur. The primary objective is to have these corporations support the Bangladeshi government – and particularly garment factories – in bolstering their health and safety standards. Indeed, there are now regular inspections, emergency fire exits, and stricter laws against locking doors. This has been confirmed in a study undertaken by the International Finance Corporation, a sister organisation of the World Bank. Its pivotal research found that since the horrendous Rana Plaza catastrophe of 2013, there has been a significant growth in revenues from garment manufacturing in Bangladesh. The nation is now “the second largest exporter of garments in the world, with the sector accounting for 80 percent of Bangladesh’s total export earnings”. [4] [5]

Thursday’s deadly accident has rocked the nation yet again, and indicates that the South Asian country must do much more in order to improve the health and safety standards of its factories. The coronavirus pandemic still causes untold misery, with 164 new cases reported last Monday (the biggest daily rise since the pandemic began). The government has introduced a strict lockdown in Dhaka, leading many migrant workers to return to their respective villages. Some are experiencing immense hardship as their sources of income dry up, with one market worker retorting:

“During the lockdown, there is no work. If this continues, I don’t know how I feed my family…It is not the coronavirus but hunger that will kill us.” [6]