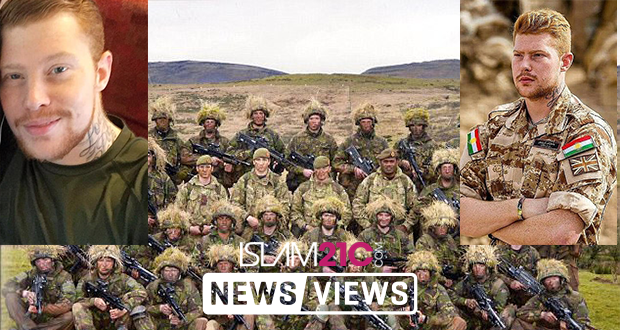 Joe Robinson, a former British soldier stationed in Afghanistan in 2012 with the Duke of Lancaster’s Regiment, has been arrested in Turkey on charges of fighting with the so-called People’s Protection Units (YPG) militia. [1] YPG, an affiliate of the PKK,[2] has been considered an armed terrorist group by Turkey, yet supported by the U.S. and Europe. This is despite the mother organisation – PKK – being listed as a terrorist organisation by Turkey, the European Union and the U.S.

For a long time Turkey has been claiming that YPG is just PKK with another name, a claim which was contested by many. Recently, U.S. Army General Raymond Thomas, the head of Special Operations Command, revealed that he had asked YPG to change its name to give ‘a little bit of credibility’ amidst Turkey’s fierce criticisms. In response to the US’ admission, Turkey’s Foreign Ministry stated: “The U.S. government and related soldiers, including the institutions, accept that there is no difference between the YPG and PKK”, thereby “proving” that the U.S. is funding terrorist organisations in the guise of ‘democracy’. [3][4]

Robinson was previously arrested at Manchester Airport on suspicion of terrorism offences, only to be subsequently released on police bail for 10 months. It is said that no charges were laid against him in Britain. [1] It is still unclear as to why Mr Robinson was not charged.

Robinson claimed that he had joined YPG to fight against ISIS after being “deeply affected by atrocities committed”. However, Turkish sources claim that YPG has been colluding with ISIS against Turkey. [5] A former member of the Tal Abyad – a Syrian region – city council had told the Anadolu Agency that YPG was plundering the homes of civilians and that YPG were forcing Syrian Arabs to migrate in an attempt of ‘ethnic cleansing’. [6] There have been various other reports of Human Rights violations by YPG.

It has also been reported that the Foreign Office in London is aware of the detention of a British national in Turkey and have requested consular access.

Some have raised concerns about the fighters from PKK/YPG returning to the UK posing a threat to Britons; and whether there will be a ‘crack down’ on these fighters similar to those returning from other “proscribed terrorist organisations” such as ISIS. [7] There also floats the question as to how much the U.K. will support its NATO ally Turkey in its fight against “terrorism”.