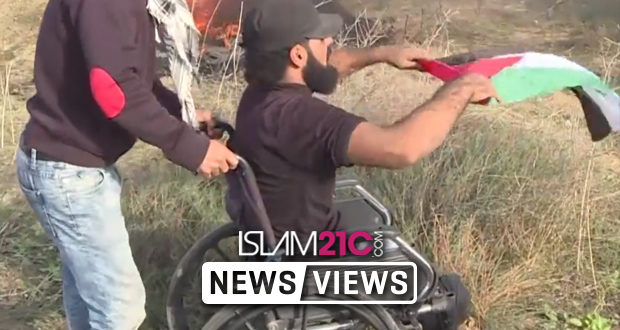 Four Palestinians were killed and around 900 were injured, at least eight critically, in Friday’s protests in the West Bank and the Gaza Strip in response to US President Trump’s provocative labelling of al-Quds (Jerusalem) as the capital of the Zionist entity.

Protests erupted in more than 20 separate areas of the occupied West Bank on the ninth day of protests and rage at the US decision that millions around the globe described as reckless and in opposition to international law, which recognises ‘Israel’ as an occupying force in East Jerusalem. Other protests took place inside the ‘green line’ in the historic city of Sikhneen in the north of occupied Palestine.

Footage emerged of occupation forces shooting one of the four victims on the outskirts of Al-Bireh near Ramallah. The Palestinian man allegedly tried to stab a member of the occupation forces. After retreating, the Zionist forces shot him twice. The man fell on the floor and seemed entirely immobilised. Whilst in this position and at a clear distance from the armed men, he was shot again fatally, immediately in front of filming media crews.[1]

The Palestinian Ministry of Health announced that the fourth victim was Amin Mahmoud Aqel, aged 19, who died after several failed attempts to rescue him during the protests in the vicinity of the Beit El illegal settlement, north of the city of Al-Bireh in the central West Bank. Aqel’s killing was announced shortly after the killing of Bassel Mustafa Mohammad Ibrahim, aged 29, from Anata, north of Jerusalem.

Gaza’s Ministry of Health announced the death of two others in protests that took place in Gaza’s eastern border area, Yaser Sukar aged 23 and Ibrahim Abu Thoria who was disabled by the last aggression against the Gaza strip and was a wheelchair user. According to the Middle East Eye, Abu Thoria had lost both of his legs in an Israeli airstrike and supports a family of 11 members. Thousands are expected to attend his funeral on Saturday.[2]

Around 24 others were injured by live gunfire and 75 by rubber-coated bullets. More than 200 were suffocated by tear gas in the West Bank and around 220 injuries were reported as a result of protests near the borders of Gaza. According to the Palestinian Ministry of Health, Palestinian medical services in Ramallah alone by Friday evening had received around 700 casualties.[3]

2017-12-16
+Editor
Previous: Jerusalem – the Eternal & Undivided Capital
Next: Turkey will do whatever is necessary to take action on Jerusalem, says Erdogan