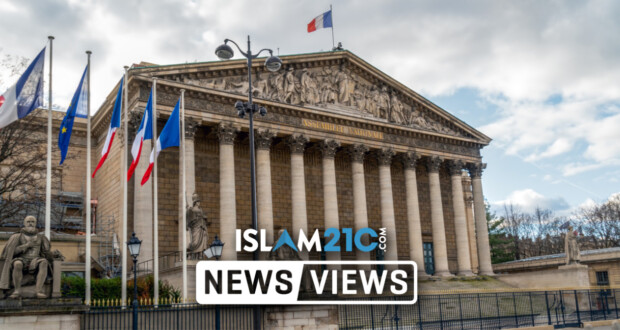 A right-wing French MP decided this that it would be in the best interests of her constituents to walk out of a parliamentary inquiry on the effects of the COVID-19 pandemic on young people in France.

The MP, Anne-Christine Lang, walked out of the inquiry after finding it unacceptable that Maryam Pougetoux, a representative of the UNEF (National Union of Students in France), attended the inquiry donning a hijāb.

After the event, Lang tweeted the following (translated from the original French):

“…I cannot accept that a person comes to participate in our work at the National Assembly in hijāb, which remains, for me, a mark of submission. So I left this inquiry.”[1]

With the current state of both overt and covert harshness towards Muslims in France, one may have been under the impression that the MP was justified in her actions, as religious symbols and clothing are banned in the parliament building, largely due to a 2004 secularist law keeping religion separate from the state.

However, the MP’s actions were completely uncalled for, as people who are invited to parliamentary inquiries and hearings are not required to follow this law. The actions of the MP have been criticised for politicising and creating a distraction to the actual inquiry that was taking place.

According to the Anadolu Agency, the chair of the inquiry, Sandrine Morch, took issue with the decision for Lang to walk out and cause other right-wing MPs to join her:

“Sandrine Morch, who chaired the session, said the lawmakers’ reaction was unnecessary and there was no rule preventing people from attending the meeting in religious attire.

Morch noted that she would not allow the fake discussion around the headscarf to shift the focus of the meeting, where the future of the country’s youth was being discussed.”[2]

In addition, the president of the UNEF, Melanie Luce, was quoted as saying:

“Under the pretext of feminism, racist remarks are made. Today, a veiled woman should not be accepted in the assembly, another shouldn’t be able to go to the museum because of her cleavage. We don’t differentiate between women.” [3]

Luce was referring to an incident earlier this September when the Musée d’Orsay in Paris was criticised for barring a French literature student from entering the building for wearing a low-cut dress.

There has been a ruthless onslaught of attacks on the right to be a Muslim woman in France, with the wearing of niqāb banned since early 2011, and the prevention of hijāb from being worn in public spaces. For a country that prides itself on openness and liberty, it is somewhat ironic that France blocks Muslim women from practising their religion, yet has, as many other countries during the pandemic, legislated that people wear face coverings in public places!

“Amid the coronavirus pandemic, France is faced with a paradox: It has just made the wearing of masks compulsory in certain public spaces, but maintained the years-long ban on Muslim full-face veils.”

This suggests, as the Washington Post recently noted, ‘if an observant Muslim woman wanted to get on the Paris Metro, she would be required to remove her burqa and replace it with a mask’.”[4]

France has the largest Muslim minority population in the whole of Western Europe, with over 5.7m, according to a Pew Research poll in 2017.[5] A close eye should be kept on developments in the “veiled” persecution of Muslims for simply no reason other than being Muslim. This event at the National Assembly is symptomatic of a much broader problem, in that many lawmakers are openly against Islam and will not stop until Muslims feel it is too difficult to remain in France.

May Allāh strengthen the Muslim sisters in France as well as the brothers who speak up on their behalf. May He help educate others to the reality and not what the French government spouts as its version of the “truth”. Āmīn.

2020-09-20
Shaheer Choudhury
Previous: Three Tips to Smash University
Next: Bring a Project into your Marriage