General Haftar returns to Libya following reports of his death 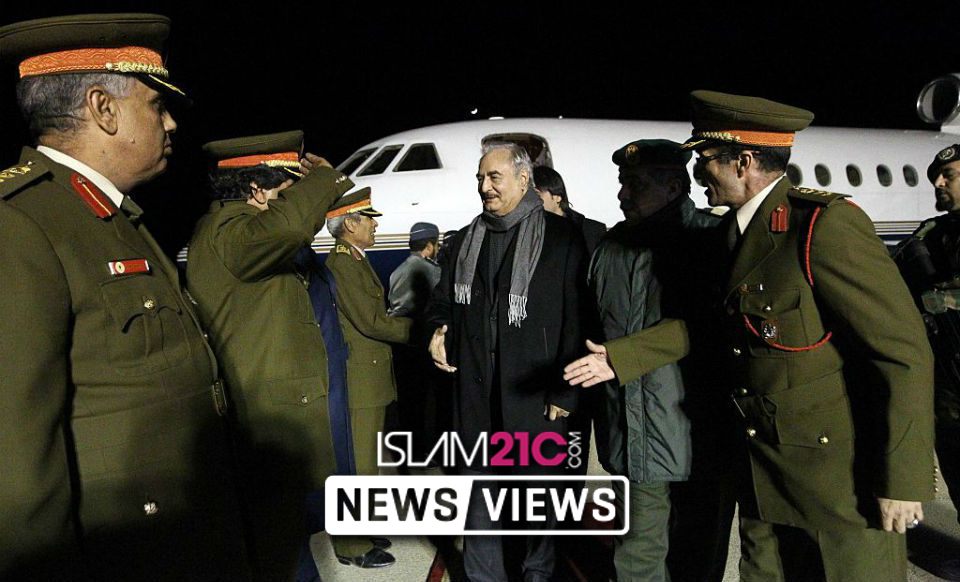 The ex-CIA asset Khalifa Haftar, a Libyan general, returned to the city of Benghazi following a lengthy absence.[1] An absence which led to rumours spreading quickly that the general had passed away following reports that he had left for Paris to seek treatment.[2]

Footage emerged on social media showing the general as he left his private jet, escorted by members from his self-styled Libyan National Army (LNA).[3]

Haftar stated that he was “…in good health,” as he was welcomed back at Benghazi’s Benina International Airport.[4]

Haftar issued a warning to those that “spread rumors” about his health,

“I won’t respond to those promoting rumours about my health, and you are not responsible for them. But there are those who will answer for them in the appropriate way.” [5]

In his quest for power over Libya the general once described his actions in the eastern city of Derna as being a means to “choke” the city irrespective of the damage and civilian cost.[6] According to Al Jazeera, Haftar was initially hospitalised in Jordan and then later sent to Paris for treatment.[7]

Haftar was once a close ally of the deceased dictator Muammar Gaddafi.[8] In 1969, he worked together and fought alongside Gaddafi to overthrow the then King Idris. He returned to Libya from the US seven years ago in order to participate in the NATO-backed revolution against Gaddafi. It is for this reason that many have referred to him as a traitor who changes alliances in his mission to gain power.[9]

Haftar appears to be responsible for much of the chaos in the North African country and as a general allegedly instructed his soldiers to commit war crimes and atrocities.[10] Forces loyal to Haftar have carried out several cold-blooded killings and massacres of innocent civilians.[11]

Human Rights Watch (HRW) stated in a report that,

In another report HRW states that the,

“Libyan National Army (LNA) forces may have committed war crimes, including killing and beating civilians, and summarily executing and desecrating bodies of opposition fighters in the eastern city of Benghazi…” [13]

In his pursuit to gain power of Libya many fear that Haftar aims to reinstate oppressive authoritarian rule and bring about more violence and destruction just like his once close comrade Gaddafi.