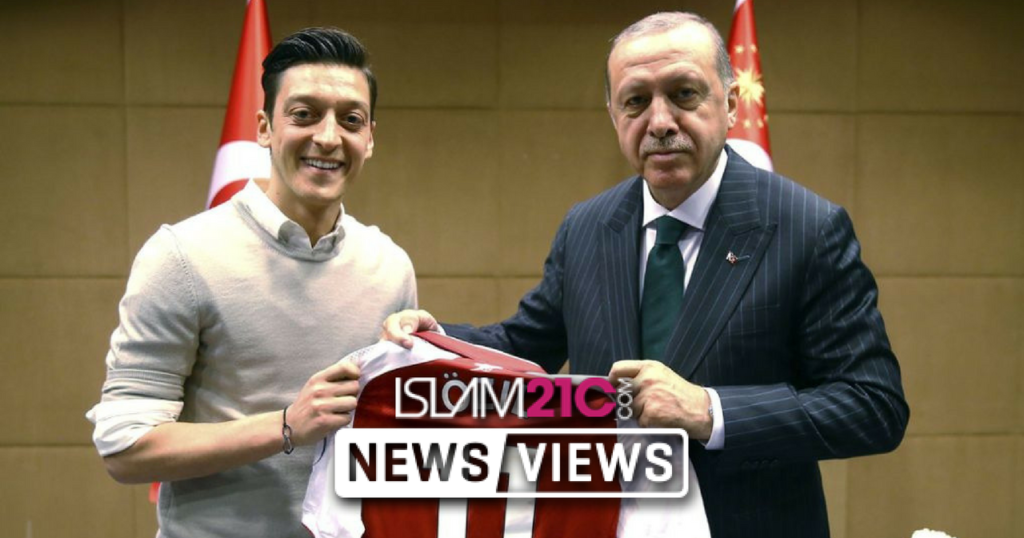 Mesut Özil, a German professional footballer and World Cup winner with Germany in 2014, has announced his immediate retirement from international football. The Muslim footballer, who has Turkish ancestry, was widely criticised by German media and politicians following a meeting with Turkish President Recep Tayyip Erdoğan in May this year. This preceded both the FIFA World Cup in Russia as well as Presidential elections in Turkey.

President Erdoğan, who has won successive democratically-held elections in Turkey, has previously been denied the right to address his supporters in Germany and other European countries, where he is viewed as a threat due to his strong views in support of Muslim causes and speaking against Islamophobia.[1]

Following Özil’s meeting with the Turkish president, hysteria ensued and wild accusations were made regarding the loyalty of the footballer, who has represented Germany for nearly a decade and has been considered one of the best footballers in the world. Özil has 92 caps and has also been voted as the national team’s player of the year five times since 2011. [2]

One senior politician said “Posing with the Turkish president is not the sort of behaviour that befits the German national team”.[3] The loudest critic however was German Football Association (DFB) President Reinhard Grindel, who quickly summoned Özil and Ikay Gundogan (who was also present at the meeting with President Erdoğan) to explain themselves in Berlin.[4]

He was quoted at the time as saying:

“Football and the DFB stand for values ​​that Mr Erdoğan does not respect. That’s why it’s not acceptable that our national team players are exploited for his election campaign.”[5]

The reaction was reflected and amplified by large sections of the German media, suggesting the anti-Turkish and Islamophobic undertones present in Europe, and continued beyond the World Cup, where the reigning champions Germany stuttered and fell at the first hurdle. Özil was made the scapegoat despite creating more chances per 90 minutes than any other player at the World Cup.[6]

Following a short period of reflection, the player finally responded announcing his immediate international retirement and strongly criticised the abusive and racist attacks he faced since meeting President Erdoğan, particularly from the DFB. He announced on social media:

“For me, having a picture with President Erdoğan wasn’t about politics or elections, it was about me respecting the highest office of my family’s country. My job is a football player and not a politician, and our meeting was not an endorsement of any policies”

“People with racially discriminative backgrounds should not be allowed to work in the largest football federation in the world that has players from dual‑heritage families. Attitudes like theirs simply do not reflect the players they supposedly represent. In the eyes of Grindel and his supporters, I am German when we win but I am an immigrant when we lose.”

“This is because despite paying taxes in Germany, donating facilities to German schools and winning the World Cup with Germany in 2014, I am still not accepted into society. I am treated as being different.”

“I received the ‘Bambi Award’ in 2010 as an example of successful integration to German society, I received ‘Silver Laurel Leaf’ in 2014 from the Federal Republic of Germany, and I was ‘German Football Ambassador’ in 2015. But clearly, I am not German….? Is there different criteria for being fully German that I do not fit?”

“My friend Lukas Podolski and Miroslav Klose are never referred to as German-Polish, so why I am German-Turkish? Is it because it is Turkey? Is it because I am Muslim?”

Concluding a long statement, he said:

“It is with a heavy heart and after much consideration that because of recent events, I will no longer be playing for Germany while I have this feeling of racism and disrespect. I used to wear the German shirt with such pride and excitement, but now I don’t.”

“This decision has been extremely difficult to make because I have always given everything for my teammates, the coaching staff and the good people of Germany. But when high-ranking DFB officials treat me as they did, disrespect my Turkish roots and selfishly turn me into political propaganda, then enough is enough. That is not why I play football, and I will not sit back and do nothing about it.”

“Racism should never, ever be accepted.” [7]