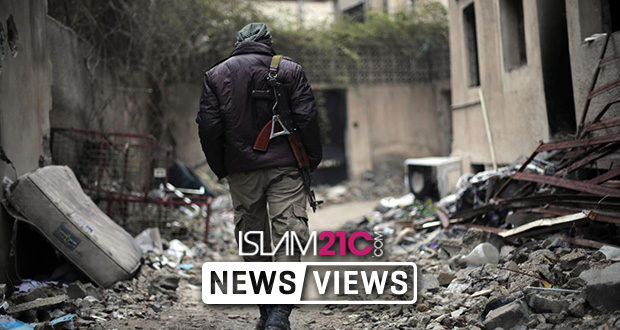 Syrian regime forces supported by the Russian military continued their remorseless ground and aerial bombardment of Ghouta over the weekend—despite the supposed 30-day ‘ceasefire’ brokered by the United Nations. [1] Reports state that regime forces have captured the largest town in Eastern Ghouta and therefore divided the rebel enclave into three parts. This has consequently further isolated already starving and petrified civilians that have been under siege since 2013. [2]

The regime and its allies began their intensive aerial bombardment to take Eastern Ghouta on the 19th February 2018 massacring more than 1,000 civilians including women and children. [3] In a city of an estimated population of 400,000, civilians have been compelled to seek shelter in basements due to the relentless and indiscriminate bombing as aid has struggled to get into the besieged city. Ghouta is strategically important to regime forces due to its proximity to Damascus.

Moscow accused “extremists” and civilians of Ghouta for not taking the evacuation corridor. However, residents have remained sceptical of the regime and Russian forces. An activist in Douma stated, [3]

“If 100 families leave Ghouta, the regime will say they’ve evacuated all the civilians and then burn it all.”

“We have no guarantees that the regime will protect the families that want to leave and that it won’t send the men to the frontlines.”

Analysts fear for the safety of the remaining civilians given the next step for regime forces may be a ground offensive. This will allow forces to enter basements that are densely inhabited with defenceless women and children seeking shelter from aerial bombardment.

It is unclear for how long and to what extent Russia intends to continue its involvement in Syria given the heavy losses that it has incurred. On 6th March 2018, a Russian transport plane en route to Syria crashed at the Khmeimim airbase in Latakia. All 39 passengers, who were Russian military personnel, died. [4] This, coupled with the Russian plane shot down over Idlib by rebel forces earlier this year, [5] may lead to fresh domestic questioning of what Russia is hoping to achieve in Syria and what price it is willing to pay.

The spokesman for one of the main rebel factions, Jaish al-Islam, stated in an interview with Orient News, that in the month of February alone, there were at least 400 members of the Syrian regime and armed mercenaries killed in Ghouta. Hamzah Biriqdar mentioned that when the regime found that the infiltration that they were carrying out was hopeless as a result of resilient displays of resistance from the rebels, the regime resorted to daily airstrikes that reached 600 each day. Hamzah also stated that the numbers of regime forces killed was around 100 each day. Speaking on behalf of Jaish al-Islam, Hamzah also asserted that they have decided that they will not retreat from Ghouta and will continue to fight until the end. [6]

The rebel factions have been displaying formidable resistance and perseverance in their aim to defend Ghouta against the Syrian regime. This has been achieved through the unity of all the factions and the cooperation against the infiltrating forces.