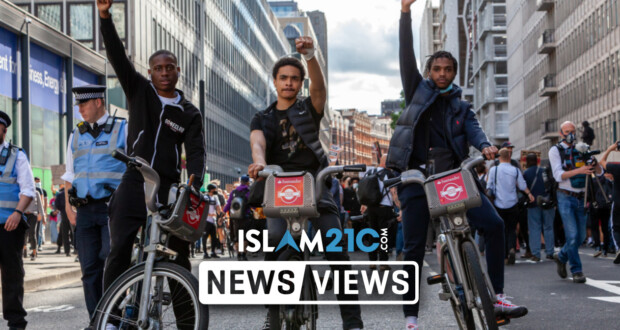 Few, if any, of the recommendations from these reviews have been implemented.

After the Government on March 31st released its 258-page report on the work undertaken by the Commission on Race and Ethnic Disparities, criticism immediately poured in as campaigners and activists argued it was merely “another total whitewash.” The report has been condemned for suggesting that focusing on the concept of institutional racism will not “achieve anything beyond alienating the decent centre ground.” [2] [3]

For my own mental well-being I am not doing media interviews on the race commission today. Like so many in Britain’s Black community I’m tired! Tired of the endless debate about whether structural racism exists with little desire to actually address it. We are being gaslighted.

“While the Tories pat themselves on the back, their report just sets back the clock on ending racial inequality even further … Ignoring the deep racial disparities afflicting people across UK society gets us nowhere.” [4]

Halima Begum, Chief Executive of the Runnymede Trust, a race equality think-tank, suggested the report had been “written to a script.”

“In it, the government cannot even bring itself to acknowledge or show any empathy for the incidence of racism in the UK … Frankly, by denying the evidence of institutional racism … I think they’ve insulted every ethnic minority in this country – the very people who continue to experience racism on a daily basis.” [5]

The Commission on Race and Ethnic Disparities was established by Conservative Prime Minister Boris Johnson’s government on 16th July 2020, shortly after the hugely controversial death of the Black American George Floyd that led to widespread protests under the Black Lives Matter cause throughout the US and around the globe. [6] Floyd died whilst held down during an arrest as a police officer knelt on his neck for over nine minutes, despite Floyd saying “I can’t breathe” when officers initially attempted to bundle him into a squad car. [7]

The Commission was questionably chaired by Dr Tony Sewell, who prior to the creation of the working group expressed his view that systemic racism does not exist in the UK, opining in 2010 that “much of the supposed evidence of institutional racism is flimsy.” [8]

Sewell was also the chair of then-Mayor of London Boris Johnson’s Education Inquiry panel, which was tasked with helping London schools to boost the grades of their pupils. [9]

Responding to Sewell’s appointment to the race report, the Muslim Council of Britain (MCB) immediately released a blistering statement highlighting Sewell’s clear incapability of the role of chair. The MCB said on July 16th of last year:

“The composition of the Government’s commission on race disparities sends a strong signal about its intentions. Many are partisans of a culture war keen on downplaying race disparities.”

“Dr Tony Sewell’s appointment clearly demonstrates this. He has maligned former PM Theresa May’s Race Disparity Audit, hates the term “racial injustice”, believes “racism is not the problem” whilst downplaying institutional racism in universities, and accused black young men of “victimhood” as they fail at school because they do “not pay attention”.” [10]

“Our view is that institutional racism and racial injustice are real, evidenced in numerous reports and should be tackled. This has clearly been demonstrated by the disproportionate deaths in BAME communities during the pandemic.” [10]

There is a real sense of frustration expressed by many who argue that the Government only set up the Commission so that it could return Britain back to ”square one” by allegedly attempting to rewrite the accepted narrative that systemic racism does exist in the country.

As Mahreen Behrana argues in an article for the Byline Times:

“Now, every time somebody wants to raise issues of structural racism, they will first be instructed to prove that it exists. There will be no need to follow recommendations for tackling structural racism if we already live in a society that has managed to ‘end’ it.” [11]

On top of the outrage that the Government has implied institutional racism does not exist in Britain, in regards to the British Empire’s dominant role in the slave trade through the 1500s up until the early 19th century [12], the report’s foreword states that a new spin should be brought into effect – which some are arguing to be an attempt at reflecting the slave trade in a more positive light.

“There is a new story about the Caribbean experience which speaks to the slave period not only being about profit and suffering but how culturally African people transformed themselves into a re-modelled African/Britain [sic].” [2]

Responding to the above, Labour’s Shadow Secretary of State for Women and Equalities, Marsha de Cordova, demanded the Government explain the meaning behind the inclusion of such an incendiary statement.

“This report was an opportunity to seriously engage with the reality of inequality and institutional racism in the UK … Instead we have a divisive polemic which cherry-picks statistics.”

“The government must urgently explain how they came to publish content which glorifies the slave trade and immediately disassociate themselves with these remarks.” [13]

During the consultation stage of the Commission’s work – which ran from 26th October to 30th November 2020 – the British Muslim non-profit MEND shared a 33-page contribution. The submission, which delved into providing responses, suggestions, and advice for lawmakers in relation to the ten questions asked in the Commission’s public call for evidence, suggested that amongst numerous other proposals, the Government ought to commit to “tackling religious, racial and gendered discrimination in the workplace through targeted interventions at all stages of recruitment, retention and promotion”, [14] as well as commit to “the use of name-blind applications and targeted interventions within employment aimed at tackling the triple penalty and improving access to employment for British Muslim women specifically.” [14]

The community-funded organisation was one of 325 public and private organisations that submitted evidence, along with 2,004 responses from academics and individuals. The Government released a summary of the responses received, and this shows “a considerable number of respondents used terms such as ‘systematic’, ‘systemic’, ‘structural’, ‘institutional’, ‘internalised’, ‘inherent’ and ‘cultural’ racism to describe what they considered to be the cause of ethnic disparities.” [15]

In addition, the summary adds:

“These views were often expressed by respondents who self-identified as belonging to an ethnic minority group and who shared personal or known experiences of discrimination arising in these forms.”

“In particular, they felt that they were less likely to be hired or to progress once they were in a job compared with their White counterparts. Many respondents said that this type of racism, as a driver of disparities, appeared to manifest largely but not exclusively in healthcare, policing and crime, education, employment, and housing.” [15]