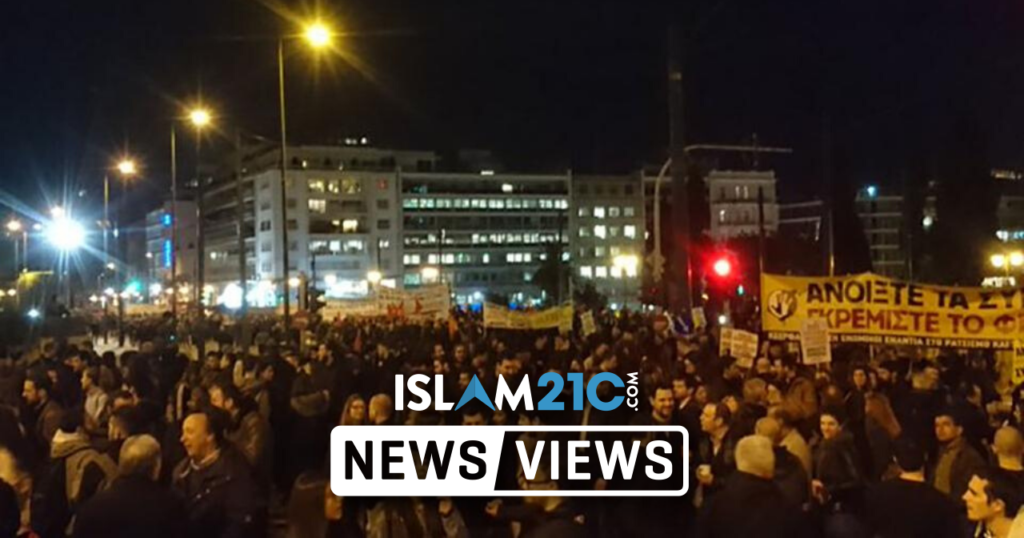 Over 7,000 people took to the streets in Athens in a huge demonstration to show their support for the Syrian refugees and migrants who have been mistreated and refused entry at Greek borders. [1]

The stance for solidarity took place in the city centre in front of the University of Athens before demonstrators moved to the parliament building in Syntagma Square. The unified protest was primarily aimed against fascists and the EU state’s policy that has blocked asylum seekers from entering.

During the march, banners were held saying “Greeks and foreigners can work together” and “Death to fascism.”

Massive demonstration in #Athens in solidarity with #refugees and against fascists and state policy. More than 7.000 people. #refugeesgr #greece pic.twitter.com/ezJ2hmBkOw

Last week, Turkey announced that it would no longer prevent asylum seekers from seeking entry into Europe, after 34 Turkish soldiers were killed by the Syrian regime forces in Idlib. [2]

Thousands of asylum seekers have since flocked to Turkey’s Edirne province, which borders Greece and Bulgaria, to make their way to Europe.

However, the lack of a hospitable welcome was unlike how Greek refugees were welcomed in Syria when they were fleeing the Nazis in 1944. Instead, Syrian refugees were treated harshly, with Greek police firing tear gas at refugees, and some even being killed. [3]

“We entered Greece and were captured by Greek soldiers and commandos.”

“They stripped us naked and took our bags and money. They used plastic rods to beat Afghan women. Europeans always claimed they respect human rights. Where are the human rights here?”

A second Syrian refugee echoed the mistreatment they faced, saying, “They showed us no mercy”.

“They beat women and men and stripped them naked to search them. And they claim that Greece is a country that respects human rights.” 2

Now, makeshift camps for more than 10,000 migrants, mostly from Syria and Afghanistan, have been set up around the border, with onlookers hearing migrants chanting “freedom”, “peace” and “open the gates”.

The President of Turkey, Recep Tayyip Erdogan, has already declared that his country, which already hosts almost four million Syrian migrants (more than any other country in the world), would no longer stop refugees from leaving. Over 1,000 police officers have been deployed at its borders to prevent the pushing back of migrants and refugees by Greece.

“A thousand special force police officers are deployed from this morning to the Meric River on the border, fully equipped, to prevent people being pushed back.”