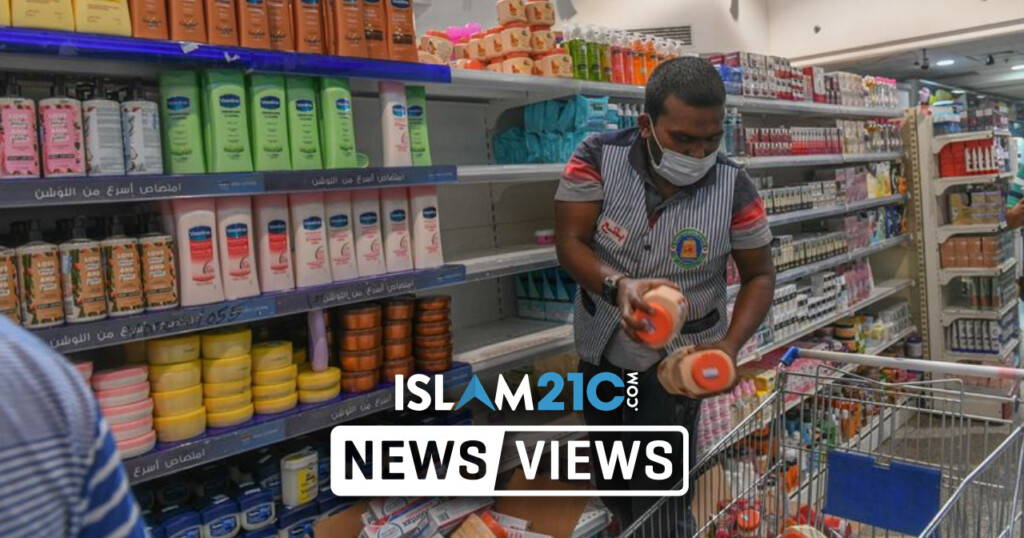 The insults and attacks made by French citizens – spearheaded by sketch artists and President Emmanuel Macron – has seen a response by Muslims (predominantly from the Arab world) take a stand to boycott French products.

In a speech delivered earlier this month detailing his plan to combat ‘radical Islamism’, Macron enraged Muslims in France and around the world with his baseless comments that Islam is a “religion in crisis all over the world today”.[1]

Macron’s words coincided with the re-publication of provocative images from the infamous Charlie Hebdo magazine, years after they were first disseminated to the public via a Danish magazine in 2006, sparking a wave of protests. Macron infamously refused to condemn the magazine’s decision, adding that the country would “not give up cartoons”.

The move comes amid rising tension between France and the Muslim world after the killing of a teacher who showed his class caricatures of the Prophet Muhammad, leading to global uproar. This led to a heightened uproar of global Islamophobia. Shortly after, a family of French Algerians were attacked by two European women near the Eiffel Tower. Two of the Muslim women who wore the hijab in the family were stabbed and are currently in critical condition in hospital.[2]

French authorities have responded with a large-scale crackdown on Islamic entities in the country, raiding more than 50 mosques and associations. As a response, Muslims around the world launched a virtual campaign to condemn France’s Islamophobia, calling for a boycott of French products.

Social media users have not only condemned Macron, but also began a virtual campaign using hashtags such as #boycottfrance, #boycott_French_products and #ProphetMuhammad, urging Muslims to boycott French products amid tensions between France and the Muslim world. [3]

Qatar-based users of the platform have been sharing photos of prominent French brands that Muslims should avoid purchasing. The list includes Cartier, Dior, Chanel, Nina Ricci, Givenchy, and Lacoste, as well car manufacturers like Renault, or cigarette brands like Gauloises.[4]

In Kuwait, the Al Naeem Cooperative Society, a large chain of supermarkets in the Gulf, has removed French products from its shelves in protest against the insulting statements against Islam and the Prophet Muhammad.

Meanwhile in Qatar, Al Wajba Dairy Company and its flagship supermarket Al Meera have said they will boycott French products and will provide alternatives.

“Dear customers, we thank you for your comments that are always a beacon of light that shine our way towards excellence. We have immediately started withdrawing French products from all our branches until further notice. We affirm that we as a national company work according to a vision consistent with our true religion, our established customs and traditions, and in a way that serves our country and our faith and meets the aspirations of our customers.”

Similar action has taken place at Qatar University, which announced it has postponed its French Cultural Week in protest to the anti-Islam insults.

“Any denigration or violation of Islamic beliefs, sanctities, and symbols are absolutely rejected. These insults harm the universal human values and the high ethical principles of all societies.”

The Organisation of Islamic Cooperation, the second-largest inter-governmental body after the United Nations, released a statement on France’s anti-Muslim rhetoric.

“We condemn the constant systematic attack on the feelings of Muslims by insulting the religious symbols represented by the person of the Prophet Muhammad.”

The statement noted that the political discourse of harming French-Islamic relations for the sake of gaining political gain encourages hatred, emphasising that it is unacceptable to insult any religious symbol under the name of freedom.[5] The global Muslim body has also called the French government to review its discriminatory policies targeting Islam and its followers around the world.[6]

We hope that, by the mercy of Allāh, a dent in the lucrative capitalist industry as a result of the boycott will remind the real perpetrators of hatred, friction, and religious tension that if you hurt us where we feel it, we will simply return the favour.

Hamza Saleem
Share. Facebook Twitter LinkedIn Email Telegram WhatsApp
Previous ArticleChampion of the World, Champion of our Hearts
Next Article There can be no mental health without justice