Haftar rules out ceasefire in pursuit of Tripoli 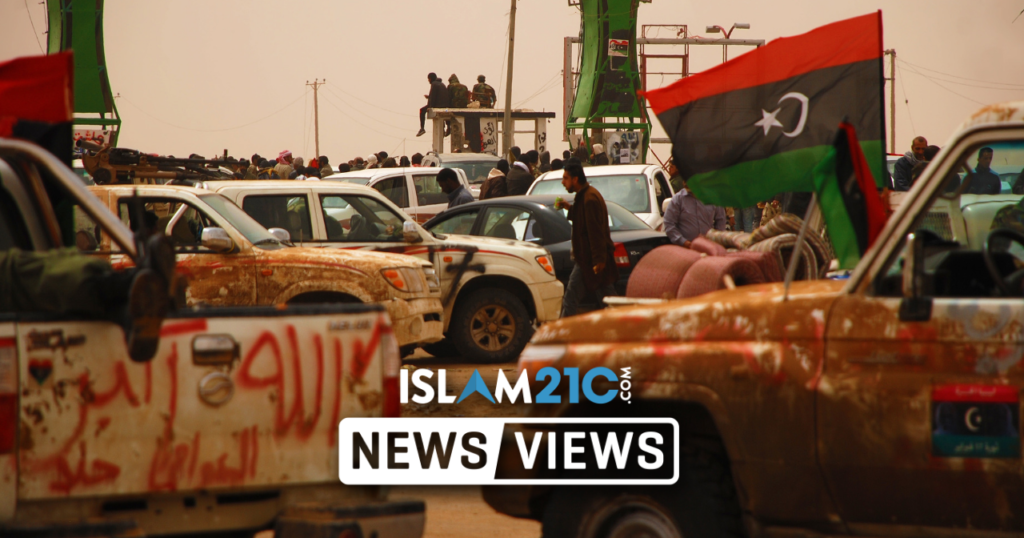 The ex-CIA asset and head of the ‘Libyan National Army’ (LNA), [1] Khalifa Haftar, has ruled out a ceasefire in light of the battle for Tripoli. The brutal military commander, in his pursuit to rule all of Libya, has led military assaults across several cities within the country.

On Saturday, heavy fighting erupted in Tripoli as Haftar’s forces made an attempt to advance within the capital. The battle for the capital has led to the deaths of more than 510 people, with over 75,000 being made to flee their homes. It has also resulted in thousands of migrants being trapped in detention centres, the closures of schools, power cuts, and families being split apart across the country.

According to the World Health Organisation (WHO), two ambulance workers were killed, and three others were wounded when their vehicles were hit on Thursday. [2]

The humanitarian situation in Libya has severely deteriorated since Haftar’s assault on the country, with the scarce supplies of food and medicine running out. [3]

The ‘LNA’, headed by Haftar, began a military assault in the Libyan capital Tripoli in early April. Haftar is attempting to capture the city from fighters that are loyal to Prime Minister Fayez al-Serraj’s Government of National Accord (GNA). [4] The GNA has the backing of the United Nations (UN) and is internationally recognised, as a result of the Libyan Political Agreement signed in 2015. [5]

Dozens of foreign-backed militia groups, guised as ‘Salafiyah’, have provided unconditional allegiance and military support for Haftar against Libya’s internationally recognised leadership. [6] This is despite many of these groups’ disavowal of Libya’s revolution against Muammar Gaddafi, accusations of it ‘going against the ruler’, and rhetoric to the effect of unconditional allegiance ‘to the ruler’. These dubious groups are responsible for the murder of dozens of Libya’s scholars and activists in Benghazi under the command of Mahmud al-Werfali, an individual that it indicated in the International Criminal Court for harrowing war crimes.

According to the Grand Mufti of Libya, Sheikh Sadiq al-Ghariani:

“The Madkhaliyyah (the characteristic name of the self-dubbed Salafi groups supporting Haftar) claim to be the champions of tawḥīd and acting according to the Sunnah despite fighting under the banner of Haftar. They are, in fact, mercenaries working for Saudi Arabian intelligence agencies and they are responsible for killing Sheikh Nader al-Omrani, may Allāh have mercy on him…They have killed tens, if not hundreds, of scholars, callers to Islām, and teachers of the Qur’ān in Benghazi”. [6]

Sheikh Nader al-Omrani was a prominent Islamic cleric and head of the Organisation for Libyan Islamic Scholars, as well as a member of Dar al-Iftaa, the country’s highest Sunni religious authority.

Haftar met with French President Emmanuel Macron on Wednesday, where he ruled out any potential ceasefire.

Joining General Haftar in his quest for dominion over Libya are the United Arab Emirates (UAE), Egypt, and Saudi Arabia. The three states support Haftar and his forces and are reported to have financed his ‘LNA’ with both money and military supplies. The states have also been responsible for carrying out several airstrikes in Libya. [8] The UAE has also been contracting its airstrikes in Libya to the private security company ‘Blackwater’, which was proven to be responsible for a number of massacres in Iraq, including one that killed and injured around 40 civilians. [9] [10]

Libya has been in a state of anarchy since the NATO-backed overthrow of the long-time authoritarian ruler Muammar Ghaddafi in 2011. At present, a patchwork of rebel brigades and two competing administrations in Tripoli and Tobruk rule the oil-rich country. [11]

With no pressure on Haftar from neither his Egyptian and Emirati backers that work with him militarily nor the international community, the prospect of him halting his military campaign in favour of dialogue and reconciliation looks increasingly dim. We ask Allāh (subḥānahu wa taʿālā) in this blessed month of Ramaḍān, in these last 10 days, to protect the civilians and bring the wrongdoers to a swift account. Āmīn.

Read More:  The Return of Gaddafi