Haftar’s threats are a ‘declaration of war’ on Turkey 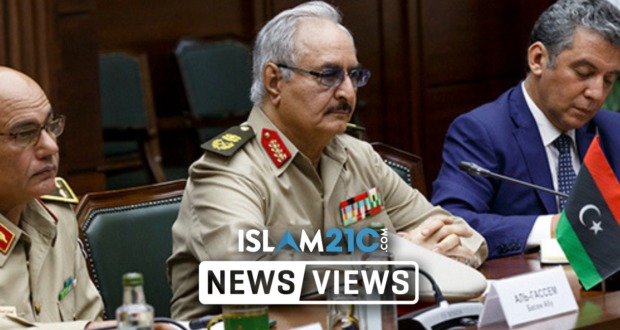 Threats by Libyan warlord Khalifa Haftar towards Turkish citizens in Libya, as well as Turkish interests, is a declaration of war on Ankara, the Libyan government has said.

The High Council of State said in a statement on Sunday that any actions taken towards its allies, especially Turkey, would harm Libya’s national security and the cooperation between the North African country and Turkey. [1] The High Council also described Haftar’s threats as “a blow to relations with a country that cooperates with Libya in many areas and constitutes a large part of the country’s total imports”. [1]

The senior government body has requested the UN to deter any future threats made by Haftar, especially those that threaten foreign citizens and made clear that the government would continue to pursue a bilateral relationship with Turkey.

On Friday, Haftar announced a ban on commercial flights between Turkey and Libya and ordered his militias to attack Turkish interests in the country, such as ships and citizens. Since then, the warlord’s militias have kidnapped six Turkish citizens.

On Sunday, Turkey’s foreign ministry urged Haftar to release the Turkish citizens, warning the renegade general that his failure to do so would enable him and his forces to become a legitimate target in the eyes of the Turkish military.

“Holding six Turkish citizens in Libya by illegal militia loyal to [Khalifa] Haftar is an act of banditry, piracy,” the foreign ministry said in a statement. [2]

According to the Turkish Foreign Ministry, the six Turkish citizens were released today by forces loyal to Haftar. [3] The six men were released at the Sidr airport in Ajdabiya city, south of Benghazi, and they worked on a ship that was owned by a Libyan citizen.

This announcement comes just a day after Turkey threatened the militia, stating that if anything were to happen to their citizens, all components belonging to Haftar would become legitimate targets.

According to Al Jazeera’s Sinem Koseoglu:

“The sailors will not be coming back to Turkey, they will continue working over there. So everything seems to be all right. Also, defence ministry sources underlined that there were no military persons among those six people, contradicting pro-Haftar media.”

“There was backdoor diplomacy going on with Turkey through local tribal leaders. Ankara made sure that Haftar’s side was given 72 hours to release the Turkish citizens. There have also been three security meetings in Ankara since this incident happened. Turkey was preparing for any scenario.”  [4]

Haftar’s threats on Turkish interests in Libya came after Turkish president Recep Tayyip Erdoğan announced his country’s support for the UN-recognised Government of National Accord (GNA) in Tripoli and aided the government’s resistance against Haftar and his offensive to take the capital.

On Wednesday, the Libyan government recaptured the strategic city of Gharyan, south of the capital from Haftar’s militias. This represents a major blow to the warlord and renegade general who used Gharyan as a military base and launch pad for his attacks on Tripoli.

The loss of Gharyan has also invigorated the Libyan government, who for months was under siege from Haftar’s forces, but has now given them a strategic advantage in rolling back the warlord’s gains in other areas of the country.

Renegade general Haftar launched an all-out offensive to capture the Libyan capital at the beginning of April. He is supported by Egypt, Saudi Arabia, and the United Arab Emirates, who are reported to have financed his ‘LNA’ with money and military supplies.

Libya has been in a state of anarchy since the overthrow of the longtime authoritarian ruler Muammar Gaddafi in 2011. The oil-rich country has since been ruled by a patchwork of rebel brigades and two competing administrations in Tripoli and Tobruk.

With no pressure on Haftar from neither his Egyptian and Emirati backers that work with him militarily nor the international community, the prospect of him halting his military campaign in favour of dialogue and reconciliation looks increasingly dim.