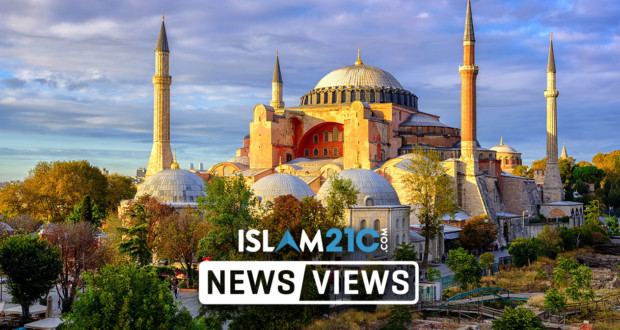 Hagia Sophia to be called a mosque, says Erdogan

Hagia Sophia, one of Istanbul’s major attractions, will be called a mosque rather than a museum.

The decision to rename the building’s purpose reflects its history when it was converted into a mosque when Fatih Sultan Mehmet II conquered the city in 1453.

“Hagia Sophia will no longer be called a museum. Its status will change. We will call it a mosque,” Erdogan said, adding that tourists will visit “Hagia Sophia not as a museum but as a mosque.” [1]

In 1453, Mehmet the Conqueror converted the Eastern Orthodox basilica into a mosque upon defeating the Byzantine empire and for over 480 years it welcomed worshippers until 1935 when Mustapha Kemal Ataturk, founder of the modern Turkish Republic, converted it into a museum.

There has been a decades long campaign to revert the museum back into a mosque and every year the Fajr Salāh is performed outside the walls of Hagia Sophia with hundreds attending the prayer.

Erdogan has been criticised for the move. However, responding to the criticisms, Erdogan blasted the international community for remaining silent over the repeated violent abuses committed by the Israeli occupation forces.

“Those who remain silent when Masjid Al-Aqsa is attacked, trampled, its windows smashed, cannot tell us what to do about the status of Hagia Sofia.”

Previous: This Birmingham Mosque opened its doors to help the city’s rough sleepers
Next: Balancing Mercy & Accountability After Christchurch