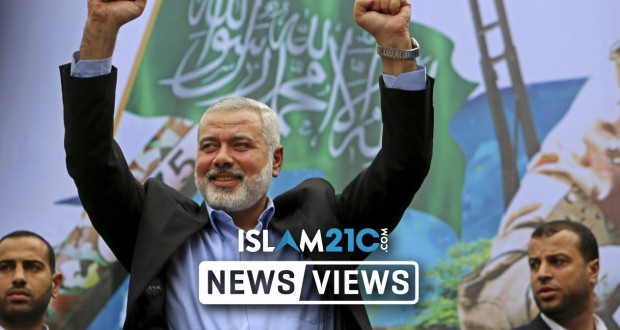 The incumbent chief of the Islamic Resistance Movement – better known as Hamas – has been re-elected for a second term in office. Ismail Haniyeh, who has been the leader of the group’s political bureau since 2017, was reported to have secured the latest vote of confidence after an internal election was held by party members on Sunday. [1]

A Hamas official relayed to Reuters the following news:

“Brother Ismail Haniyeh was re-elected as the head of the movement’s political office for a second time.” [1]

It is understood that during the private vote – which is deliberately held behind closed doors to prevent Israeli interference and any potential attacks – the organisation’s Shura Council also re-elected Saleh al-Arouri as Hamas deputy chief. The well-known Haniyeh is a veteran in Palestinian politics and a participant of the armed resistance movement. He was formerly an aide to the founder of Hamas, the late Shaykh Ahmed Yassin (raḥimahu Allāh). Haniyeh also had a lengthy stint as Prime Minister of Palestine for a period of eight years. His tenure began shortly after the 2006 elections, which gave Hamas a massive and unexpected victory.

Since the shock results of the 2006 general elections, the apartheid state of ‘Israel’ has consistently accused Hamas of engaging in terror tactics. Such baseless claims have become the norm. Successive Israeli governments have used these claims as a pretext to maintain a chokehold on the coastal Gaza Strip, where Hamas won a resounding victory. Through this blockade, ‘Israel’ has been able to impede the flow of imports, in addition to even controlling the allocation of electricity and water.

The elusive street artist Banksy once described the state of Gaza with the following statement:

“Gaza is often described as ‘the world’s largest open-air prison’ because no one is allowed to enter or leave. But that seems a bit unfair to prisons – they don’t have their electricity and drinking water cut off randomly almost every day.” [2]

A number of Western countries portray Hamas in a negative light. Yet a seldom-quoted line from Shaykh Ahmed, the late founder of the Islamic Resistance Movement, reveals its true character. [3] He once said of the persisting ‘Israel’-Palestine conflict: