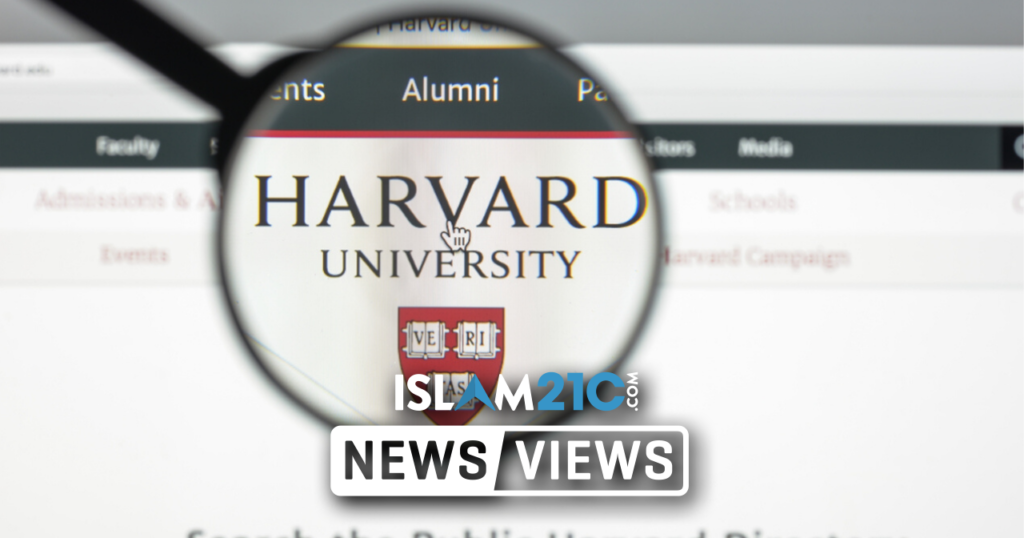 Students of Harvard University staged a walkout from a talk by Israeli diplomat and former leader of the Israeli settler movement, Dani Dayan, leaving him addressing a near-empty auditorium. [1]

Over 100 law students from @Harvard University, Wednesday, walked out of a lecture held by Dani Dayan, current Consul General of #Israel in New York, at Harvard Law School. Eventually, Israeli officials will be speaking to empty lecture halls! https://t.co/ErIZnhbMpO pic.twitter.com/iNCDwwEVg3

The dramatic moment took place on Wednesday earlier this week at the Harvard Law School, where Dayan was scheduled to speak at an event called “The Legacy Strategy for Israeli Settlements.”

Noah Feldman, a Harvard law professor and the host of the event, said that the invitation did not represent an endorsement of Dayan’s views, but was a desire to engage his views. [2]

However, as he was about to begin his lecture, over 100 students stood up, raising placards that read ‘Settlements are a war crime’ before walking out of the room in silence.

The bold gesture left Dayan to continue his speech to only a handful of audience members who remained.

Watch the dramatic event unfold below:

Dayan tweeted his dissatisfaction towards the demonstrators after the event, calling the protestors “a bunch of losers.” [3]

“On my way back to New York I think what are they so happy about themselves? A bunch of losers shaking in fear of a university discipline committee. So instead of confronting me – quietly abandoned the hall and let me speak freely. I was optimistic. Those who are afraid do not believe.” [4]

One of the organisers of the protest, Samer Hjouj, told the Middle East Eye:

“To have 100 people standing up all at once and silently did leave an impact.”

“As soon as we found out about the event, we planned and it took a lot of time but we had a team at every school in Harvard, finding people to help us make it happen.” [1]

“I’m disappointed that the Harvard Law School would let this kind of propaganda for a colonial project for accumulation by dispossession be framed as “legal.” This is not only complicit but simply dishonest,” a student organizer remarked. “Let us be clear, there is a consensus among the international community that Israeli settlements are illegal under international law and a violation of the fourth Geneva Convention.” [5]

Amaya Arregi, a student who took part in the walkout, wondered how the Law School could justify “inviting an Israeli politician to talk about how they go about violating international law,” adding:

“They gave him a big platform and he was going to speak unchallenged. The topic of the panel was precisely what legal methods Israel uses to advance their settlement project. We felt that Harvard Law was opening the door to such views to become normal in academic settings.”

Another student involved in the planning of the walkout voiced his frustration at the organisation of this event, saying:

“I’m disappointed that the Harvard Law School would let this kind of propaganda for a colonial project for accumulation by dispossession be framed as ‘legal’.”

Others took to Twitter to defend the walkout towards the Israeli ambassador who advocated for the establishment and maintenance of Israeli settlements in the West Bank.

We stand in solidarity with @WaterPalestine and the walkout they organized for an event called "The Legal Strategy for Israeli Settlements" by Israeli ambassador Dani Dayan. Israeli settlements are illegal under international law & we demand justice for the Palestinian community. pic.twitter.com/JS6kz0hkiR

100+ ppl protested Israeli war criminal Dani Dayan’s talk on “The Legal Strategy of Israeli Settlements.” Settlements are illegal under int'l law and part of a grander strategy of settler colonialism and the displacement of Palestinians.

Hamza Raza, a participant of the walkout and graduate student at the Harvard Divinity School, said that the action of the students demonstrated a growing number of young people in the US who were growing supportive of Palestinian human rights.

“The fact that virtually the entire room walked out on him says something. People who continue to take such positions will find themselves speaking to more and more empty rooms.” 5