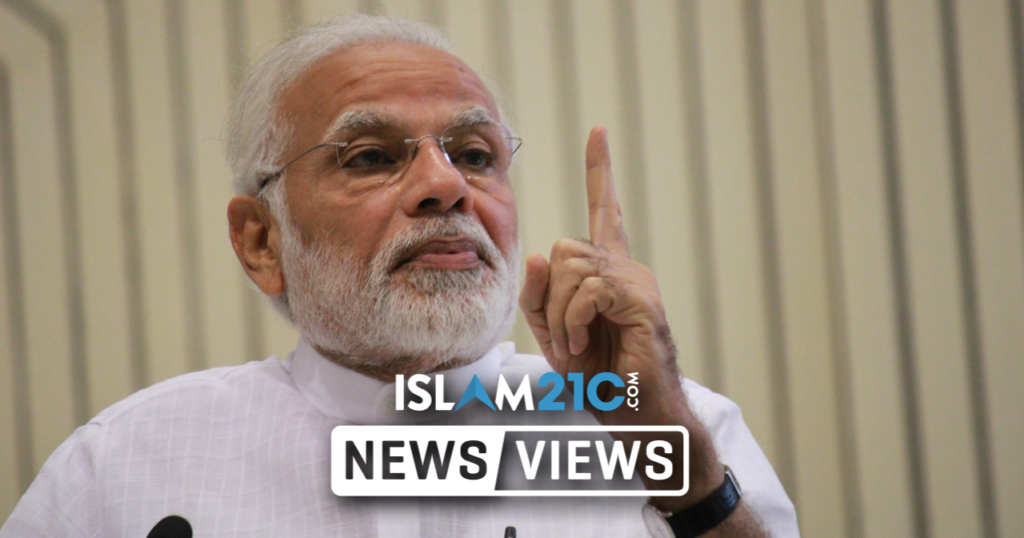 In addition to frosty Indian-Pakistani diplomatic relations and their countless related disputes, the ferocious rivalry between the two regional neighbours is also reflected in the world of cricket. It is, therefore, no surprise that India’s heavy defeat of Pakistan on August 28 caused celebration amongst the former’s fan base. At the same time, Pakistan supporters were left feeling dejected. However, the 2022 Asia Cup match – which was won by India by five wickets with two balls left – was largely unrelated to the situation that unfolded in early September in the English city of Leicester. [1] [2] [3]

So what exactly has been going on in the UK’s 13th largest city in the past month? While there has been a good deal of media reporting regarding “tension” and “serious disorder”, there has simply not been enough reported on the toxic Hindutva ideology that is believed to be behind the inter-communal violence. Moreover, there has been a spate of anti-Muslim attacks in the city since early 2022, but this has not been heavily focused on during media coverage.

On the weekend of the Queen’s funeral (17th and 18th of September), massive Hindutva-inspired crowds erupted in Leicester as police swiftly stepped in to disperse said groups as well as Muslims who spilled into the streets as a showing of solidarity. On the Saturday, a large group of masked Hindu men marched approximately two-and-a-half miles into a predominantly Muslim area of Leicester. The mob was filmed with some members being openly armed and others heavily disguised through the use of facemasks and hoods. Throughout various days preceding the weekend of the Queen’s funeral, police made numerous arrests for charges including affray, suspicion of racially aggravated common assault, suspicion of conspiring to incite violent disorder, and suspicion of possession of an offensive weapon. [4]

During the 17 September march, a 42-year-old community leader by the name of Rukhsana Hussain described hearing cries of “Jai Shri Ram”, which translates to “hail/ victory to Lord Ram”. Moreover, there were reports of glass bottles being lobbed, unprovoked attacks on Muslim members of the public, and groups of unruly Hindu men marching past various local mosques and taunting the local population. [5]

The term local population is fitting to use, as later reporting on the Leicester violence has revealed that half of those arrested came from outside the county of Leicestershire. The Guardian noted that five had come from Birmingham, one from Solihull, one from Luton, and another from London. [6]

To date, Leicester police have made 47 arrests; of these, eight people have been charged and one person has been sentenced to 10 months imprisonment. The man, 20-year-old Amos Noromh, was charged with the possession of an offensive weapon and pleaded guilty at Leicester Magistrates’ Court on 19 September. [4]

The Hindutva ideology has its roots in the late 1800s and early 1900s; the word itself is often translated as Hinduness, but it is also generally understood to mean the advocacy of Hindu nationalism and the establishment of a Hindu state. If this sounds familiar, you would be correct as the current Indian Prime Minister, Narendra Modi of the BJP (Bharatiya Janata Party), has been heavily espousing, and supporting such goals within India’s various states. [7]

Immediately after Modi’s landslide re-election victory in May of 2019, he fulfilled a long desired demand of the RSS (Rashtriya Swayamsevak Sangh) – a paramilitary organisation of which he was once a member, and which is itself ideologically aligned with the Hindutva movement. What was the demand? To revoke the special autonomous nature of Jammu and Kashmir, which, of course, is India’s only Muslim-majority region. [8]

Indeed, the far-right Hindu nationalist militant group known as the Bajrang Dal (translated as the “Brigade of Hanuman”) – which has been widely condemned for its repeated attacks on the Muslim community in India – is also effectively an embodiment of the Hindutva belief system. To take things a step further, the Bajrang Dal is itself seen as the youth wing to the broader VHP (Vishva Hindu Parishad). It is of no surprise to learn that the entire movement has been described as being “almost fascist in the classical sense” as it seeks to achieve cultural hegemony in India. What is particularly alarming is that it now seems to have infected Britain. [9] [10]

It is interesting to note that Indian outlets such as WION and The Hindu have chosen to omit any mention to the Hindutva ideology in various pieces published on their websites, while international outlets have also opted to ignore mention of “Hindutva” and chosen a stance that does not apportion blame to either Muslims or Hindus. Other sites such as OpIndia have boldly claimed that “Islamist attacks” are to blame. [11] [12]

Regardless of the scarce reporting on the Hindutva movement being behind the Leicester disorder, the MP for Leicester East, Claudia Webbe, has plainly warned that the government must rapidly tackle “extremist” beliefs held by “fringe elements”. Webbe has further stated, “…we have fringe elements led and inspired by extremism and rightwing ideology rearing its head in the UK and in the peaceful city of Leicester.” [4]

The independent MP went on to say,

“If we do not understand the root cause this will spread beyond Leicester to other areas. The government needs to intervene and ensure that social media platforms stop this from getting much, much worse.

“Much of this violence and hate is being shared on social media and through online communications. It is racism and fascism and it is rearing its ugly head. It is a national problem that requires a national response by the police and other agencies.

“The social media firms – TikTok and Twitter and WhatsApp – are the mediums that are being used and they should bear some responsibility,” [4]

It has been falsely reported in a number of news outlets including the UK’s Telegraph as well as Indian websites such as the aforementioned OpIndia and RepublicWorld that the respected debater and public speaker Mohammed Hijab travelled into Leicester in order to instigate violence against Hindus. In fact, some outlets have audaciously gone so far as to label Hijab as the “instigator-in-chief” of the spate of violence. [13] [14]

In reality, Hijab visited the city in order to raise awareness of the poisonous ideology behind the violence and he documented his trip on social media and on YouTube. In his posts, he explicitly states that there is zero issue with Hindus in general, but that the Hindutva extremist belief system is to blame for the region’s disorder in the past month. In a statement, the researcher, author, and co-founder of Sapience Institute states,

“Recently there have been tensions amongst some members of the Muslim and Hindu communities in Leicester which has resulted in violence, anti-social behaviour and aggression. Last week I visited Leicester with the objective of advising the Muslim community and to help de-escalate tensions.

“I am aware, that based on the history of similar community tensions, there are going to be internal and external parties that will use the current issue to promote a malicious narrative about minorities and community relations in the UK, with a negative focus on the Muslim community. This adds to the importance of why we must de-escalate any tensions.” [15]

In his 23 September press release, Hijab further went on to clarify the twin objectives he had for visiting Leicester and to categorically oppose “any violence and disharmony” amongst different British communities.

“Given my influence in the community, I had two key objectives visiting Leicester. The first was to ensure that no one from the Muslim community breaks the law or manifests signs of extremist behaviour. The second was to remind the community that the law allows the use of reasonable force to defend oneself and vulnerable people. Innocent women were being attacked. My actions and words were recorded and they were said and done in front of the Police.

“My public work is very clear. I do not condone or advocate for any violence and disharmony between any members or groups of the British public. I will continue to work to ensure the harmony and wellbeing for all, including the Hindu and Muslim communities.” [15]

What can we do to combat ideologies such as that of Hindutva?

It is understandable to be concerned about such periods of hatred against Muslims, but we should remind ourselves that we are from the Ummah of the Prophet (ﷺ) and this inevitably brings with it very unique challenges and tests in this world.

“And you shall certainly hear much that will grieve you from those who received the Scripture before you (Jews and Christians) and from those who ascribe partners to Allah; but if you persevere patiently, and become al-Muttaqūn (the pious) then verily, that will be a determining factor in all affairs.” [16]

As a collective Muslim body in the city of Leicester, in the wider UK and around the world, we are more than two-billion strong. The key to combating ideologies such as those of Hindutva, as well as other far-right extremist thinking, is to stand firm in our beliefs, and to be mindful that although others may resort to appalling acts that incite violence or hatred, we will not stoop down to such a level. It is a testament to the high standards with which we live, that the police in Leicester noted that the majority of Muslims were peaceful in their approach during the recent events.

It has been reported that Yahyā bin Abī Kathīr (Allah have mercy on him) once said:

Where there have been reports such as those of Hindutva-inspired men beating up Muslim citizens in the street and of using threatening language against the same, we ought to remind ourselves that we are far better than this.