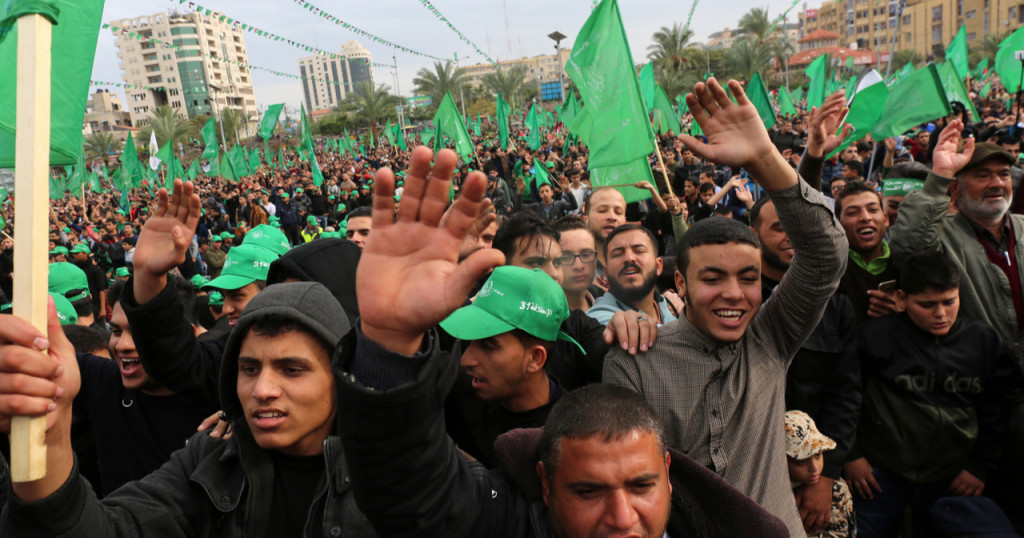 The British government is worryingly further aligning itself with the Zionist state of ‘Israel’, as the failing Home Secretary Priti Patel announced plans on Friday to outlaw support for the Palestinian resistance organisation Hamas. Patel has also sought to introduce prison sentences of up to fourteen years for gestures of support to the organisation. In a press release published on the government’s website, the Home Office has stated: “This action will support efforts to protect the British public and the international community in the global fight against terrorism.” Critics of the proposed mandate argue that such a move would not be conducive to solving the multigenerational conflict between ‘Israel’ and Palestine. Indeed, such a step would have the reverse effect, as it would seek to imply that an expression of support for Hamas is akin to antisemitism – a sentiment that is plainly untrue. [1]

Nevertheless, Patel has accused Hamas of being antisemitic. In reality, it opposes Zionism and the occupation of Palestinian lands by Jewish settlers. Patel stated to an audience at the Heritage Foundation in Washington D.C.:

“Hamas is fundamentally and rabidly antisemitic. Antisemitism is an enduring evil which I will never tolerate. Jewish people routinely feel unsafe – at school, in the streets, when they worship, in their homes, and online.

“This step will strengthen the case against anyone who waves a Hamas flag in the United Kingdom, an act that is bound to make Jewish people feel unsafe.” [2]

It is worth emphasising the fact that Hamas – otherwise known as the Islamic Resistance Movement – is a political organisation that happens to also be the sole military power in Palestine. Unlike ‘Israel’, which enjoys the backing of the United States with billions in military funding each year, the State of Palestine has no land army, airforce, or navy. Under relentless oppression and occupation from the Israeli government since 1948, Palestinians continue to suffer from a lack of basic necessities and supplies which include electricity, clean water, and sanitation facilities. In addition, there are restrictions on the flow of building materials through the imposition of blockades at six of the seven Gaza Strip border crossings with the outside world.

I welcome the UK’s intention to declare Hamas a terrorist organization in its entirety — because that’s exactly what it is.

Thank you to my friend @BorisJohnson for your leadership.

Hamas is seen globally as the only real resistance organisation against the Israeli occupation forces, which regularly evict Palestinians and bulldoze their homes in order to make way for Jewish settlements. Despite the clear and egregious crimes of the occupation forces, the UK government’s 19 November press release states as follows:

“Hamas is an organisation which calls for the establishment of a Islamic Palestinian state under Sharia law and has repeatedly called for the destruction of Israel. It has long been involved in significant terrorist violence.

“The organisation’s military wing is already banned in the UK but following a new assessment the Home Secretary has concluded it should be proscribed in its entirety. This action will support efforts to protect the British public and the international community in the global fight against terrorism. Hamas is already listed in its entirety by the United States and European Union.” [1]

Basing her planned proposal on the Terrorism Act of 2000, Conservative Home Secretary Priti Patel has stated that Hamas “has significant terrorist capability”. While doing so, she conveniently ignores the elephant in the room, namely that the apartheid state of ‘Israel’ has a military equivalent in strength to Australia and Canada. [3] Nonetheless, during a keynote speech delivered to the Heritage Foundation [4], Patel hailed the proposed plans:

“Today the UK Government has laid an order in Parliament to proscribe Hamas in its entirety – including its political wing.

“Hamas has significant terrorist capability, including access to extensive and sophisticated weaponry as well as terrorist training facilities, and it has long been involved in significant terrorist violence. Hamas commits, participates, prepares for and promotes and encourages terrorism. If we tolerate extremism, it will erode the rock of security.” [1]

Hamas has responded angrily to the planned outlawing by warning that the United Kingdom continues to favour “the aggressor at the expense of the victims”. [5]

The organisation further stated that the UK government was acting in a hypocritical manner. As the apartheid state of ‘Israel’ persists in terrorising the Palestinians, the UK maintains close ties with the former.

“Resisting the occupation with all possible means, including armed resistance, is a guaranteed right by the international law for the people under occupation…The occupation is terrorism. Killing the indigenous people, expelling them by force, demolishing their homes, and detaining them are terrorism.” [5]

Patel is a longstanding Eurosceptic and pro-‘Israel’ politician who was appointed Home Secretary by Prime Minister Boris Johnson in July 2019. Before assuming her current position, she served in Theresa May’s cabinet as international development secretary. In the Cameron Government, she presided as Minister of State for Employment, in addition to Exchequer Secretary to the Treasury.

Patel’s time at the now defunct Department for International Development (DFID) was cut short after reports revealed that she had carried out a staggering fourteen secret meetings with Israeli ministers – including then Prime Minister Benjamin Netanyahu – in August 2017. It was reported that during the now infamous set of meetings, Patel sought to recommend that her department – the DFID – provide international aid money to Israeli army field hospitals. The Israeli government has rejected calls to disclose exactly whom it treats at such facilities. Therefore, there is no guarantee that Syrian forces, rebels, or civilians are being cared for in those locations. At the same time, Patel has criticised the amount of support given to the Palestinian territories through UN agencies. As a result of the scandal, Theresa May effectively forced Patel into tendering her resignation on 8 November 2017. Yet it is no surprise that the minister was rewarded with another post in Johnson’s government. [6]

Patel’s failures do not end at mere complacency in her government roles. On the contrary, she also has a shambolic record in her professional conduct with civil servants. One of the most severe allegations is that of February 2020, when Patel forced the top civil servant at the Home Office – the former permanent secretary Sir Philip Rutnam – out of his post owing to the fact that he had defended his staff against Patel’s alleged bullying behaviour. [7]

The Home Secretary reached a £340,000 settlement with Rutnam in March 2020. Despite this, she continues to deny the former top civil servant’s claim that she swore and shouted at staff members. Prime Minister Boris Johnson has repeatedly given his backing to Patel despite public uproar over her conduct. A bullying enquiry reached the conclusion that there is “evidence Priti Patel broke ministerial code”. [8]

Chief Editor of Islam21c Dr Salman Butt recently secured an unprecedented public apology from Patel. This came after a lengthy court case in which Dr Butt challenged the government’s release of a document, which suggested he was a terrorist sympathiser.

After receiving an apology from the government and monetary compensation for the defamation of character since 2015, Dr Butt expressed his view that the “discourse of extremism is dead”.

“One of the clearest lessons from this long battle is how baseless the notion of ‘extremism’—and therefore ‘counter-extremism’—actually is. I believe the discourse of extremism is dead; more and more people are realising that it is a nebulous term used by the powerful to silence any thoughts, ideas or speech they do not like or cannot challenge without coercion. It is the ‘heresy’ of today.

“Over the course of these legal proceedings the government’s own legal arguments have described ‘extremism’ as a subjective value judgement not based on any objective criteria, as well as being neither a sufficient nor necessary cause for terrorism. Yes, you read that correctly! It is outrageous that people’s lives are destroyed and rights are restricted on a daily basis as a result of subjective and arbitrary judgements.” [9]

Share. Facebook Twitter LinkedIn Email Telegram WhatsApp
Previous ArticleFour Imams | The Son of a Soldier
Next Article Our DEMANDS to the Chinese Embassy for the Uyghurs