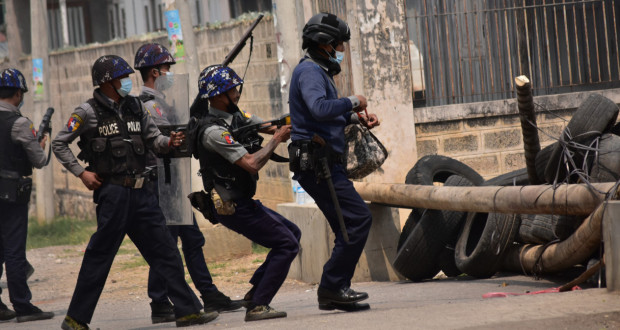 The ruling military junta of Myanmar has been condemned for its premeditated murderous rampage during clashes which occurred between anti-junta protesters and members of the security forces in March 2021. According to Human Rights Watch (HRW), the events of 14 March – which saw at least 65 protesters and bystanders killed as police and soldiers opened fire – were orchestrated by the junta after state forces “kettled” people and employed lethal force. The severity of the military’s actions is such that civilians were shot despite not posing as a visible threat to security forces at the scene. Moreover, a number of witnesses stated that people were even shot dead when attempting to go to the aid of the wounded. [1]

HRW has stated that during the events of mid-March in Yangon’s Hlaing Tharyar Township, security forces acted in a calculated manner that wrought numerous deaths and injuries. HRW’s Myanmar researcher Manny Maung said:

“The Myanmar security forces’ massacre of several dozen people outside Yangon in mid-March was not a case of riot control gone astray. The Hlaing Tharyar killings have the hallmarks of a planned attack on protesters for which those responsible, regardless of rank, should be held to account.” [1]

Maung further added that such a horrendous abuse of power is bound to occur again, unless the international community and organisations come together to apply pressure on junta commanders.

“Hlaing Tharyar was a bloodbath for which all those responsible should be brought to justice…Such atrocities will continue unless the UN Security Council and concerned governments take concerted action to hold Myanmar’s junta leaders to account.” [1]

The people of Myanmar continue to experience economic hardship and political uncertainty at the hands of the military, which is headed by 65-year-old General Min Aung Hlaing. It should be noted that the very same security forces have also been responsible for genocidal acts against the Rohingya Muslim minority group hailing from Rakhine State. Indeed, even prior to the coup d’état of February 2021, the Rohingya community had been relentlessly persecuted by the army, with consistent government endorsement coming from the former de facto leader and one-time Nobel Peace laureate Aung San Suu Kyi. The failed human rights advocate is currently under house arrest, and is on trial for breaching COVID-19 restrictions and being in possession of illegal radio equipment. [2]

The state of Myanmar has a long history of brutal oppression against the Rohingya people, who are a predominantly Muslim minority. The ethnic group consists of two million people, with significant numbers of the oppressed minority living in Bangladesh, Myanmar, Pakistan, Malaysia, and other Asian nations. [3] The plight of the Rohingya stretches back to the late 1970s, with “Operation Dragon King” being undertaken by the Myanmar military in 1978, which resulted in the first refugees entering neighbouring Bangladesh. Over the years, there have been frequent occasions where the government of Myanmar has attempted to push greater numbers of Rohingya out of its borders. A range of “operations” by the security forces have caused successive groups of Rohingya to flee to Bangladesh, with “Operation Clean and Beautiful Nation” taking place in 1991-1992, and the most recent being widely documented from 2017 to date. [4]

The Rohingya have long suffered from ostracism and persecution within their own country. Crimes such as gang rape, torture, forced labour, mass murder, and the burning of entire villages have been instigated by the military. Min Aung Hlaing, who was a key player in the February 2021 coup, appointed himself Prime Minister on 1 August. He has assembled a caretaker government until general elections take place, which will most likely occur no earlier than 2023. [5] [6]