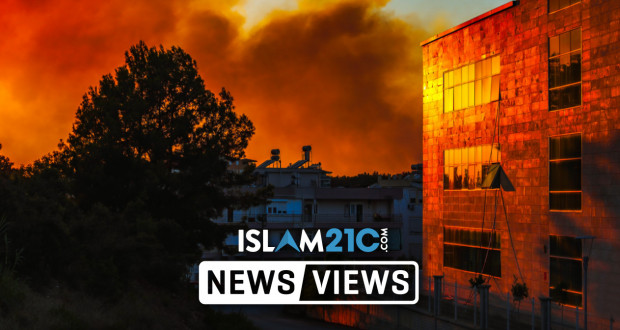 Numerous regions in several countries have been experiencing particularly hot summers this year. Turkey has been no exception to this, with the deadly heat being blamed for causing devastating wildfires across the country’s southern provinces. Tragically, four people – including a married couple and a volunteer fire fighter – have been killed in the devastation, with many families being forced to evacuate their homes. A fourth victim has been identified as an 82-year-old man. [1]

So far, officials have reported the existence of at least 70 wildfires across 17 provinces. 50 civilians have been taken to hospital for treatment from smoke inhalation and other related difficulties. The huge plumes of smoke generated by the flames have been responsible for increasing the health risks of many people. The fires rage due to the deadly combination of extreme heat and heavy winds, and have already devastated several provinces of the country. Thousands of buildings have been scorched, with only mere shells remaining. [2]

By Friday morning, federal government representatives said 57 of the fires had been extinguished or brought under control. However, the Minister of Agriculture and Forestry Bekir Pakdemirli warned that blazes were still raging in the provinces of Kutahya, Adana, Kayseri, Osmaniye, Mersin, and Kocaeli.

“We were hoping to contain some of the fires as of this morning but while we say cautiously that they are improving, we still cannot say they are under control.” [2]

A senior official working for Turkish President Recep Tayyip Erdoğan has alarmingly said that foul play has been suspected as being a possible root cause of the ferocious infernos. In a statement, an aide said, “Those responsible will have to account for the attacks against nature and forests”. [1]

Thousands of rescue personnel have been involved in efforts to contain the countless fires, with drones, planes, helicopters, and ground vehicles all tackling the disaster. Rescue efforts have recently been bolstered, with crucial aid provided by the neighbouring international community. For instance, Azerbaijan has deployed hundreds of emergency response personnel, in addition to helicopters and other related equipment. Moreover, Ukraine and Russia have also offered to support Turkey by sending planes in order to douse the fires from the skies above.

Blamed heavily on climate change, there has been a spate of deadly wildfires around the globe in recent months. Just earlier this month, the Golden State in the US had succumbed to more than 85 separate blazes. In the counties of Butte and Plumas, a staggering 181,000 acres of land have been charred. [3] The Canadian province of British Columbia has also experienced deadly fires, with at least 300 raging across the region just last week. [4]