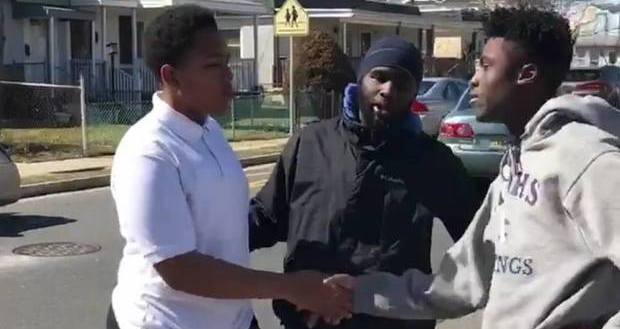 Last month a video of Ibn Ali Miller breaking up a fight between two young, black, school boys drew attention the world over. Brought onto the Steve Harvey show “Harvey’s Heroes”, Ibn Ali Miller describes growing up in a challenging environment only to have his life and worldview transformed under the tutelage of a Muslim at the local mosque.

What I found fascinating about this is that his action has impacted the hearts of so many people, that he is being hailed a hero and, as Ibn Miller points out himself, that his intervening in the fight between the boys, Sheldon and Jamar, is described as unbelievable and incredible.

In the above video Ibn Miller can be heard imparting advice to the two boys. He reminds them of the whispers of the devil who feeds on their anger.

Say, “I seek refuge in the Lord of mankind […] From the evil of the retreating whisperer who whispers [evil] into the breasts of mankind…”[1]

He reminds them of their duty to their parents.

“And We have enjoined on man to be dutiful and kind to his parents.”[2]

He reminds them of the evils of pandering to the masses.

Ibn Al-Qayyim reported: Abdullah Ibn Mas’ud said, “The true community (jama’ah) is that which adheres to the truth, even if you are alone.”

He reveals the hypocrisy of those who take joy in their fighting.

“Unquestionably, it is they who are the corrupters, but they do not perceive it.”[3]

He highlights the consequences of going down this path and he encourages the two to make peace.

“O people, spread peace, feed the hungry, and pray at night when people are sleeping and you will enter Paradise in peace.”[4]

With all the strong opinions circulating the media about the need for an Islamic reform and the subsequent desensitisation that has occurred amongst people and their unwillingness to debate, there is not much room for contesting public opinion. However, with such embodiment of Islamic character, in the space of a few minutes Ibn Miller’s actions and words have touched the hearts of millions of people worldwide.

Ibn Miller’s actions remind us that what is needed, and what has been lacking, is for us Muslims to follow the example of the Prophet (sall Allāhu ʿalayhi wa sallam) in character, to impart the advice of the Qur’ān, and to spread peace and break conflict. It seems a simple fix, and yet, many of us have forgotten to do this. We have become so concerned with defending our rights as Muslims, proving others are wrong about Muslims, debating politics affecting Muslims and making ourselves heard as Muslims, that we have neglected to actually be Muslims.

You can watch clips from Steve Harvey’s show below:

Previous: MPs’ report reveals shocking levels of food wastage across UK
Next: Islam at Work – do you have a Muslim Network?

Ayshah Syed studied English at Goldsmiths University of London, followed by a Masters in Comparative Literary Studies. During her years at university she became involved in da'wah, volunteering for various Islamic organisations. She has studied Arabic and works as an English-Spanish translator. She recently edited 'Meadows of the Divine: 40 Prophetic Traditions on the Virtues and Rulings of the Qur'an' by Sheikh Alomgir Ali, as well as other projects and publications for MRDF. She is currently working as Editor for Islam21c.