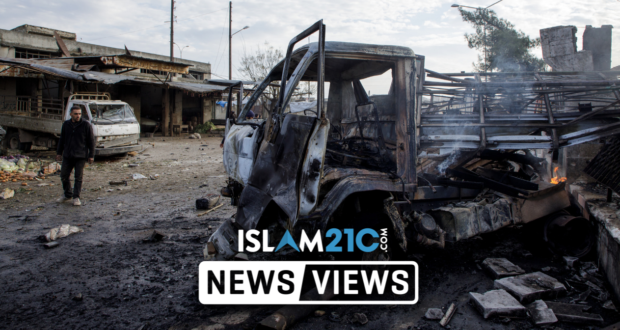 As the world battles the growing COVID-19 pandemic, Syria continues to battle against the deadly virus that is the criminal Assad regime and its allies.

On Monday, three civilians were killed in Russian airstrikes in the de-escalation zone in Idlib. At least three others were injured in the brutal attacks, according to the White Helmets civil defence group.

The Syrian opposition aircraft observatory reported that over 20 airstrikes have taken place, targeting three villages and two mountains in the Jabal al-Zawiya area. Attacks also took place in two villages in the north-western countryside of the Hama province.

As harrowing stories and images show that the catastrophic butchery of the Syrian people continues to take place, search and rescue efforts are underway in different regions of Syria to rescue the injured and recover the dead.

Under an agreement with Turkey and Russia, Idlib falls within a de-escalation zone, yet oppression, persecution, and bloodshed by the tyrannical Assad regime and its allies continues to take place despite efforts by Turkey to halt the violence.

A number of ceasefire attempts and agreements have been repeatedly violated by the Syrian regime and its allies, which seeks to exterminate the remaining rebel-held enclaves by massacring innocent civilians and attempting to force the rebels into surrender.

As the brutality of the Assad regime and its allies continues to spread in Syria like the COVID-19 pandemic that has viciously spread across the world, we must not forget the suffering that our brothers and sisters are continuing to endure around the world in places such as Syria.

Syria’s eight-year civil war was born out of peaceful protests by Syrian civilians for reforms and changes in the Syrian regime. The latter’s response was one of violence and brutality, which forced the people to take up arms in defence.

In recent months, tens of thousands of innocent civilians fled the Idlib province in Syria after airstrikes and bombings by the Russia-backed regime forces intensified.

May Allāh (subḥānahu wa taʿālā) have mercy on those that have passed away, ease the suffering of the people of Syria, and bring an end to the brutal Assad regime. Āmīn.

[1] https://www.trtworld.com/middle-east/russian-airstrikes-in-idlib-syria-kill-at-least-three-civilians-37094 [2] https://www.aa.com.tr/en/middle-east/russian-airstrikes-in-idlib-syria-kill-at-least-3-civilians/1869626
2020-06-09
Hamad Momin
Previous: One God Many Names | Al-Hafīdh (The Ever Preserver)
Next: Quranic Community #22 | To Whom do we Truly Owe Gratitude – (Final Part)