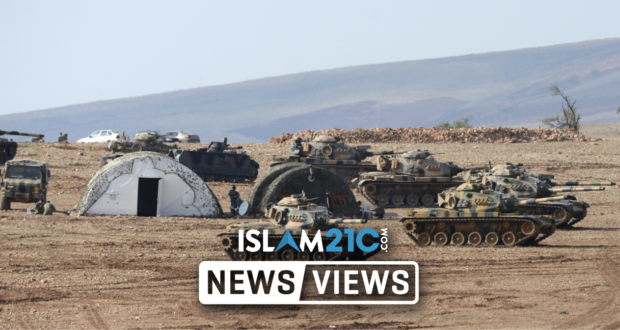 The President of Turkey, Recep Tayyip Erdogan, has vowed that “an operation in Idlib is imminent” in order to transform the border between Turkey and Syria into a safe place. [1]

“Turkey has made every preparation to carry out its own operational plans. I say that we can come at any point.”

In his speech addressing his party’s parliamentary group in Ankara, he warned that  “it is only a matter of time” before the operation is launched, but it is dependent on Damascus failing to step back from behind Turkish military positions.

This comes after the Syrian regime that is backed by Russia failed to honour the ceasefire agreed in 2018 in which acts of transgression are prohibited in order to end the bloodshed in Idlib.

“We did not reach the desired results in our talks [with Russia]. The talks will continue, but it is true that we are far from meeting our demands at the table.” 1

This has led to the offensive displacing around 900,000 civilians from their homes and shelters within 3 months, 500,000 of whom were children.

Russia, who is currently the Syrian regime’s main ally, responded by saying the move would be the “worst scenario.”

“If we are talking about an operation against the legitimate authorities of the Syrian Republic and armed forces of the Syrian republic this would, of course, be the worst scenario.”

He also added that Russia and Turkey were staying in contact to prevent tensions escalating further.

Turkey has explicitly expressed its concern for the safety of Syrians along its southern border for many years, both from terrorists seeking to form a “terror corridor” and from attacks by the Assad regime. The regime’s advances have sent over a million civilians fleeing towards the border of Turkey, which already stands as the number one country in the world to host the greatest number of refugees (3.7 million). [3]

Since 2016, Turkey has launched a trio of successful operations across its border into northern Syria. These include Operation Euphrates Shield (2016), Operation Olive Branch (2018), and more recently, Operation Peace Spring (October 2019).