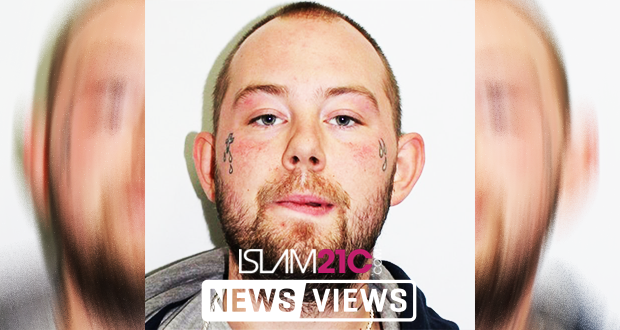 Eight days after an acid attack against Muslims that took place in East London on the 21st June 2017, police have released the image of suspect John Tomlin.

Jameel Mukhtar (37) and his cousin Resham Khan (21) had been celebrating Resham’s 21st birthday when a corrosive substance was thrown on them last Wednesday whilst they were waiting at a traffic light near the junction of Tolgate Road and Newham Way (A13) in Beckton. The attack is said to have left them with “life changing injuries”.

The victims described a white man matching Tomlin’s description who knocked on their window and threw a corrosive substance onto Ms Khan before circling around the car and throwing more onto Mr Mukhtar.

They described “excruciating pain” as their clothes began to melt and their skin and eyes burned, which left them with 3rd degree burns. They ran out of the car—which had crashed in the panic—without clothes begging passers by for water. One driver then stopped and took them to a Newham General Hospital, after which they were reportedly flown to the Chelmsford burns unit better equipped to treat their injuries.

Mr Mukhtar was reportedly put into an induced coma to treat his burns whilst Ms Khan has had a skin graft.[1]

One of the victims was reported as expressing frustration at the mainstream media outlets not reporting the attack “because we are Muslims”, although many seem to have begun to do so today since Tomlin’s picture was released.[2]

People who appear to be of Muslim background or ethnic minorities are advised to be vigilant, particularly women who are more likely a target of the characteristically cowardly racist/Islamophobic attacks, which are becoming increasingly common.

Visit https://www.met.police.uk/ or call 101 if you have any information that may help.