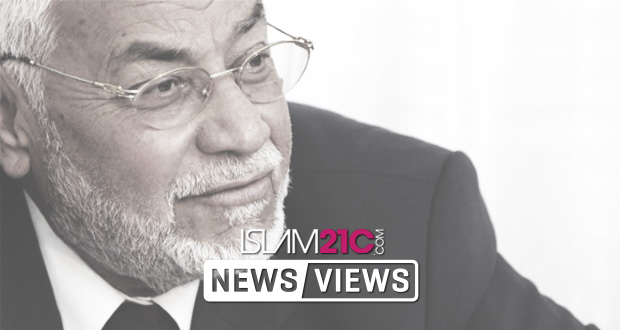 Indeed to Allāh we belong, and to Him is our return.

We offer our sincere condolences to the family, colleagues and Ummah at large of the passing of Shaikh Mohammed Mahdi Akef, the former General Spiritual Guide of the Muslim Brotherhood.

The sheikh passed away in an Egyptian prison, having been among the thousands wrongfully imprisoned by Sisi’s military coup regime in a crackdown on dissent and political opposition.

Listed as 12th of the 500 most influential Muslims in 2009, his Islamic and political activities date back to the 1940s, with his direct teachers including Hasan al-Banna, Muhy al-Din al-Khatib and others.[1]

He was a seasoned graduate of the University of the Prophet Yūsuf (‘alayhi al-Salām), having spent decades in Egyptian prisons unjustly.

He was first imprisoned by the dictator Gamal Abdel Nasser in 1954 for twenty years, being released by Anwar Saddat in 1974. He then became a member of the Egyptian Parliament in 1987, before which he was jailed again. He was then jailed by the dictator Hosni Mubarak from 1996-1999. And finally he was among the senior political leaders imprisoned as part of the military coup d’état against Egypt’s first democratically elected president, Muhammad Morsi, as part of a crackdown on political opposition to the military dictatorship. He was subject to a number of false allegations, including “disrespecting the judiciary”, which he was declared innocent of in 2014. Despite this, and his deteriorating health, he remained in prison until his passing just days ago, rahimahullāh.

He was elected into the Executive Committee of the Muslim Brotherhood in 1987 until October 2009, after which he was replaced by the current Spiritual Guide of the organisation, Dr Mohammed Badie—who has also been imprisoned by the coup regime.

He was a man with concern for the spiritual and political wellbeing of the Muslim Ummah, and he not only talked the talk but walked the walk. He helped set up projects for the nurturing of Muslim youth all around the world, including Australia, Bangladesh, Cyprus, Germany, Jordan, Kenya, Malaysia, Mali, Saudi Arabia, Turkey, the UK and USA. May Allah accept it from him out of His mercy.

We ask Allāh to shower mercy and forgiveness on this slave of His, and give more patience and perseverance to those in Egypt and elsewhere struggling in the face of brutal oppression and injustice. We are reminded that struggle and strife is a part of the test of this life, and Allāh reminds us,

“Or do you think that you will enter Paradise while such [trial] has not yet come to you as came to those who passed on before you? They were touched by poverty and hardship and were shaken until [even their] messenger and those who believed with him said, ”When is the help of Allāh?” Unquestionably, the help of Allāh is near.”[2]