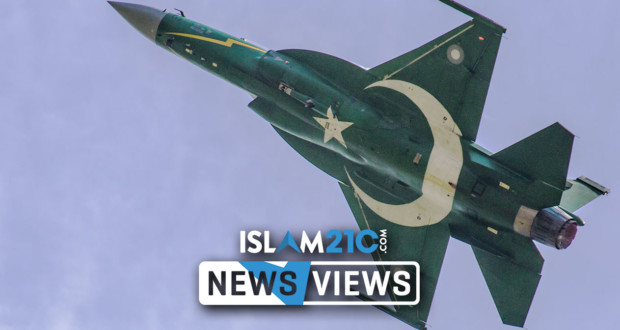 Islamabad accuses New Delhi of violating its airspace and says military will respond to “uncalled for aggression”.

Pakistan, however, has said that the attacks took place in an area that neither populated by civilians nor the military, providing pictures that purport to show an area of a forest that had been bombed.

Indian foreign secretary, Vijay Gokhale, said that the airstrike had killed a large number of people and had avoided areas populated by civilians.

“Credible intel was received that JeM was planning more suicide attacks in India. In the face of imminent danger, a pre-emptive strike became absolutely necessary”, Gokhale said in a news conference. [1]

The airstrikes took place in the northern Pakistani village of Jaba according to the military, 60km from the border that separates Indian and Pakistani administered Kashmir.

Islamabad also said that the Pakistani Air Force had forced the Indian fighter jets out of Pakistan’s airspace and reported no deaths or injuries in the airstrikes that occurred in Balakot, Khyber Pakhtunkhwa province.

“Indian aircrafts intruded from Muzafarabad sector. Facing timely and effective response from Pakistan Air Force released payload in haste while escaping which fell near Balakot. No casualties or damage,” Major General Asif Ghafoor said in a statement in the aftermath of the botched attack. [2]

“Once again [the] Indian government has resorted to a self-serving, reckless and fictitious claim,” Khan said in a statement.[1] “This action has been done for domestic consumption, being in an election environment, putting regional peace and stability at grave risk,” he added.

Khan also said that Pakistan’s military had now reserved the right to respond and would respond accordingly at a time and place of its choosing.

“Now, it is time for India to wait for our response,” Maj. Gen. Ghafoor said. “The response will come at the point and time of our choosing, wherever the civil and military leadership decides and has, as a matter of fact, decided. It is your turn now to wait, and get ready for our surprise,” he added.

According to local residents, who spoke to Al Jazeera, the area was once used by JeM, however they withdrew from the region and the camp had been shut “years ago”. [1]

The Indian airstrike has considerably heightened tensions between the two nuclear-armed nations. The attack follows Indian accusations that Pakistan was behind an attack in the Indian occupied Kashmir that killed and injured a number of Indian paramilitary soldiers.

Islamabad has repeatedly rejected Indian claims that it was behind the attack as well as supporting armed terrorists. [3]