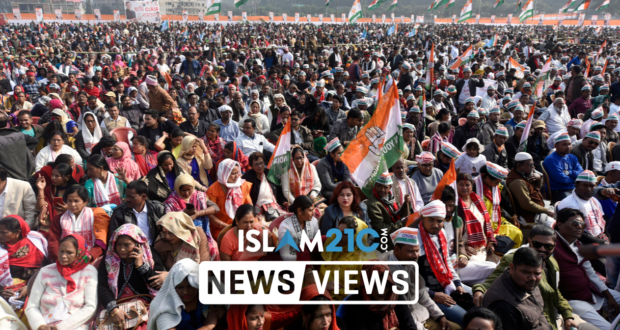 India: Police use facial recognition at rally amid privacy concerns

The Delhi Police have implemented the use of facial recognition technology in order to “screen” crowds protesting against a controversial new citizenship law. [1]

In addition to identifying criminals and missing children, the software, which has increasingly been utilised at airports, offices, and cafes across India, is now being used for an “illegal and unconstitutional” purpose to screen crowds at Prime Minister Narendra Modi’s political rally.

“The use of the system for profiling and surveillance at public congregations is illegal and unconstitutional.”

“From building an underlying database of people from public protests to running it on crowds of people attending rallies, this directly impairs the rights of ordinary Indians from assembly, speech and political participation.”1

Police in the Indian capital have defended their use of the technology despite the protests claiming the lives of 26 people since protests began on 20th December.[1] The Delhi Police have said that the use of the system is “based on incredible intelligence inputs about possible disruptions.”

A spokesman for the Delhi Police said:

“Delhi Police assures that best industry standard checks and balances against any potential misuse of data are in place. Racial or religious profiling is never a relevant parameter while building these datasets.”

Mass protests have been ongoing across India in response to the controversial enactment of the Citizenship (Amendment) Act 2019 (CAA) by India’s ruling Hindu nationalist party, the BJP.

The Act, an amendment to a legislation from 1955, purports to offer amnesty, refuge, and citizenship through naturalisation to immigrants who enter India illegally from Pakistan, Bangladesh, and Afghanistan on or before December 2014 – as long as they are not Muslim. At odds with the secular pluralist principles enshrined in the Constitution of India, the CAA makes religion a criterion for Indian citizenship for the first time.

The public response has been damning. Large-scale violent and lethal protests have erupted in several major Indian cities, including Delhi, Mumbai, and Calcutta. The protestors and critics – amongst whom are prominent academics, human right activists, and student organisations – have condemned the CAA as a demotion of the 200 million Muslims in India to second-class citizens by providing preferential treatment to other religious groups.

These criticisms are in line with the broader goal by Modi and the BJP to weaken India’s secular foundations and replace them with exclusively Hindu foundations, in accordance with the BJP’s Hindutva leaning.

Indian authorities have cracked down harshly in response to the protests. In an attempt to shut down protestors, Section 144 has been used to arbitrarily arrest and detain protesters. This legislation is a draconian and colonial-era rule from the 19th century, which prohibits a gathering of more than four people. Another favoured tactic of Modi’s government has been the shutdown of internet and phone services in several areas to thwart and quell organised protests.

Similarly, reports indicate that police forces have resorted to batons, tear gas, and waterboarding to disperse protesting crowds. Most notably, these violent methods were used to forcefully enter Jamia Millia Islamia University (JMI) and Aligarh Muslim University (AMU) on 15 December. Student protestors at these universities reported Islamophobic slurs and violent assaults by police officers, leading to dozens of injuries and the unlawful detention of countless more. Protesting has continued while the increase in state-sponsored violence has resulted in the tragic death of 26 protestors, including an 8-year-old boy. Several hundred more have been injured.

The international response has been muted. However, over ten thousand academics worldwide have penned a statement condemning the police brutality seen at JMI and AMU.[2] Likewise, the UN Secretary General’s Spokesman, Stephane Dujarric, drew attention and concern to the “use of excessive force by security forces.”[3] The CAA itself has been condemned by The Office of the United Nations High Commissioner for Human Rights (OCHR), which labelled the CAA as “fundamentally discriminatory.”[4]

Nevertheless, Muslim fears are compounded when contextualised in what has been a difficult year for Indian Muslims at the hands of the BJP. In the run up to the recent Indian elections, Amit Shah, Indian Minister of Home Affairs, characterised Muslim migrants from Bangladesh as “termites”, pledging to “throw them into the Bay of Bengal”, further galvanising sectarian violence in Northeast India.[5]

Similarly, Modi’s decision in August to reverse seven decades of consistent policy saw the only Muslim majority state in India, Jammu and Kashmir, stripped of its autonomy. The Supreme Court’s decision in November to permit the construction of a Hindu temple on the site of the illegally demolished 16th century Babri Masjid further demonstrates little consideration, at the highest level, of Indian Muslim sentiments.

Although not directly linked, the CAA and its potential ramifications for India’s Muslims must be considered alongside the BJP’s pledge to introduce a National Register of Citizens (NRC). The CAA will allow non-Muslims who are unable to prove their Indian citizenship – and would otherwise be characterised as illegal immigrants – to apply for and obtain citizenship if they come from Pakistan, Bangladesh, or Afghanistan.  Crucially, however, this will not be possible for Muslims, who are not protected by the CAA. Therefore, where a Muslim is unable to provide the appropriate documents to prove their citizenship – as will be the case with many despite their centuries-old roots in India – they risk being labelled an illegal immigrant and detainment and deportation.

The CAA and the NRC together have the potential to add constitutionally unlawful gradations to citizenship rights – a terrifying prospect for India’s 200 million Muslims.