#STAND4UYGHURS
Home / News / India vs China: Both countries accuse each other of violating de facto border 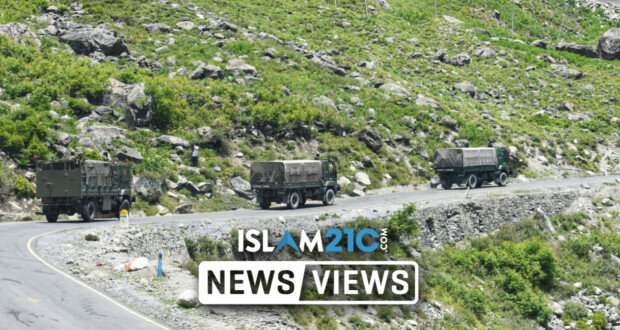 India vs China: Both countries accuse each other of violating de facto border

Both India and China have blamed each other following a heated and deadly confrontation in the strategic Galwan Valley, located in the Indian Ladakh region, where physical fights saw the death of 20 Indian soldiers.

India and China both share a border of more than 3,440 km, although much of this remains improperly demarcated. Several areas on either side of the border are claimed by both countries. The border follows the Line of Actual Control (LAC) rather than a border that is legally and mutually agreed upon.

Indian and Chinese soldiers are said to have brawled with rocks, clubs, and fists during the confrontation, which saw no shots fired under a 1996 bilateral agreement barring the use of explosives, guns, and conventional weapons within two kilometres of the LAC.[1] Twenty Indian soldiers are reported to have died, with more than 70 injured.

Reports say that the soldiers clashed on steep ridges nearly 14,000 feet (4,300 m) high, with some falling into the fast-flowing and sub-zero temperature Galwan River below.

Tensions at the border are common between the two Asian nuclear powers, although this is the first confrontation since 1975 in which soldiers have died. China is yet to report any casualties. Soldiers from India and China are also in severe tension in Nathu La in the Indian state of Sikkim, where blows were traded in May.[2]

China’s Foreign Minister, Wang Yi, warned India in a phone call on Wednesday with his Indian counterpart to not underestimate Beijing’s resolve and determination to protect what it believes to be sovereign Chinese territory. In a statement issued by the Foreign Ministry, Yi added that “the Indian side would best not make an incorrect judgement of the situation.”[3]

Zhao Lijian, a spokesman from the Chinese Foreign Ministry, stated on Friday that the Galwan Valley is located entirely on the Chinese side of the LAC. In a series of tweets earlier today, he accused India of unilaterally building roads, bridges, and other infrastructure since April that cross the LAC into Chinese territory, in a clear example of ‘deliberate provocation’.[4]

Commenting on the episode, a spokesman from the Indian Foreign Ministry, Anurag Srivastava, laid blame with the Chinese, stating that Chinese claims over the Galwan valley were ‘exaggerated and untenable’ and ‘not acceptable’. Srivastava added that this position was not “in accordance with China’s own position in the past.”[5]

In a televised address on Friday, the Indian Prime Minister Narendra Modi stated that there had been no Chinese incursions into Indian territory. Modi said that “nobody has intruded into our border, neither is anybody there now, nor have our posts been captured.”

Modi went on to say that Indian armed forces have been “given a free hand to take all necessary steps” to protect Indian territory.[6]

Modi’s position on Friday appears to conflict with the Indian government’s position taken earlier in the week. On Wednesday, Indian Foreign Minister Subrahmanyam Jaishankar reportedly told Chinese diplomats that the confrontation and violence occurred after “the Chinese side (erected) a structure in Galwan Valley on our side of the LAC.”[7]