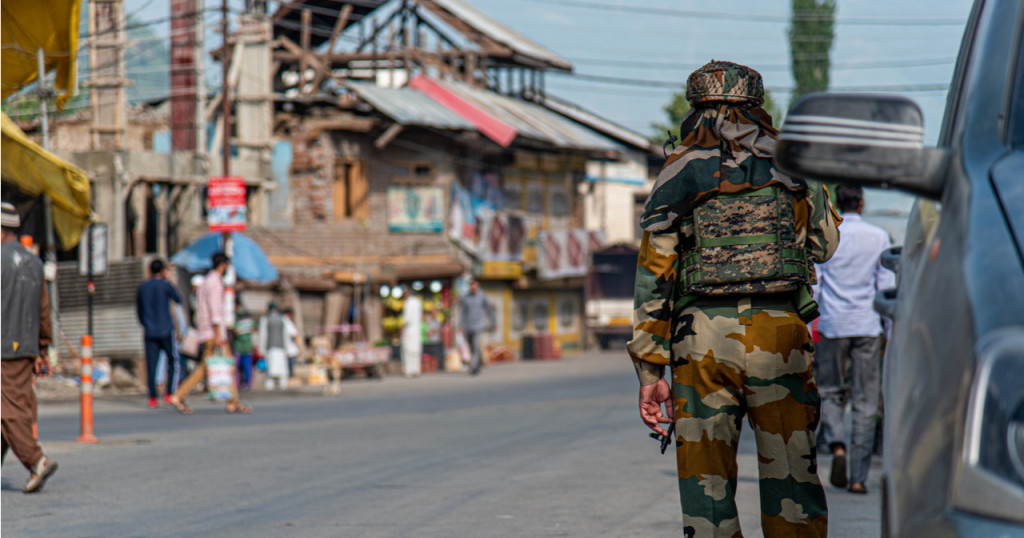 On 19 January 2022, Stoke White Investigations released a press statement and issued a legal appeal to the London Metropolitan Police against two Indian government officials. In the address, both Indian army chief Manoj Mukhund Narvane and Home Minister Amit Shah have been cited for their war crimes against Muslims in occupied Kashmir.[1]

In a grilling 41-page report based on 2000 testimonies taken over the past year, new proofs of torture, kidnapping, as well as the extrajudicial killing of activists, journalists, and other innocent civilians – with the particular targeting of Muslims in the region – point to the culpability of Indian security forces. The report also attests to Israeli intelligence forces being involved in the torture of victims, a nexus which highlights the partnership between the Bharatiya Janata Party (BJP) and the Israeli government.[2]

Hakan Camuz, Director of Stoke White, made the following remarks regarding the concerning findings:

“The fact that Kashmiri Muslims have only international law to turn to after decades of seeking justice in their own country and only being subjected to further violence for doing so, means Stoke White must begin the process of justice on their behalf, in a country that we understand respects the rule of law.”

The extensive report highlights several disturbing findings, which include 450 cases of torture, 1500 cases of pellet gun victims, 100 enforced disappearances, and 30 cases of sexual abuse. Many of these discoveries were corroborated by lawyers, human rights defenders, and practitioners, as well as NGOs and journalists.

Of the ground-breaking evidence available, Stoke White particularly focused on the case of Zia Mustapha. Zahid Zia, the brother of Zia Mustapha, said: “Zia was found not guilty of any offence by Indian Courts. He was arbitrarily detained in different jails for 18 years of his life, since the age of 15. In October 2021 we were told that Zia had been killed by Indian forces.” His family has made the following emotional plea: “[W]e just want the dead body of Zia to be handed over to us – so that we can bury him with our hands.”2

Other chilling testimonies include that of Imran Sultan, who describes his brother’s torture to be so severe that many of his body parts were “broken – like mutilation”. Sultan added the following details: “When I held his right arm after we recovered his body, [it] felt as if the arm was boneless – the bones had been crushed from severe beating. Blood kept oozing out from his mouth for several hours before he was laid to rest. He had severe internal damage.”

Last week, one of our clients, Muhammad Ahsan Untoo, a human rights campaigner was arrested by Indian police – we worry about his safety as he is a torture victim.

Further case studies include that of innocent civilians, children, and elderly women being shot dead, drowned, executed in home raids, or tortured to death. There is a whole section describing cases of gang rape and sexual violence by Indian army personnel, as well as that for torture, enforced disappearances, and pellet gun violence.

How have such crimes been allowed to take place?

According to the report, while the Indian authorities routinely conduct acts of violence and abuse against Muslims and have been doing so for the past three decades, an overwhelming ‘culture of impunity’ is prominent. This is due to the 1990 Special Powers Act, which allows for the dismissal of scrutiny towards security personnel unless the “Indian authorities grant prior permission for sanction via courts to prosecute its own forces”. Despite years of human rights abuses, not a single Indian military member has been prosecuted for ‘unlawful conduct’ in Jammu and Kashmir, despite the mounting evidence. Under the Geneva Conventions Act (1957), the United Kingdom (UK) has universal jurisdiction for war crimes; this ultimately allows them to prosecute any evidenced crimes or violations committed in Kashmir, despite the offences occurring outside the UK and irrespective of the nationalities involved. [2]

The BJP Indian government led by Prime Minister Narendra Modi has adopted rhetoric derived from the Global War on Terrorism (GWOT) to justify its violent attacks on Muslims in Kashmir. This has allowed them to reframe the conflict in the region from “a conflict of land due to divisions exacerbated by and inherited from colonialism, to a fight against ‘terrorism’”. 2 Moreover, taking inspiration from the GWOT, they have implemented statutes and policies which discriminate against Muslims, such as house raids, arbitrary arrests, forced disappearances, and strict surveillance programmes.

Khalil Dewan, Head of Investigations at Stoke White, commented on the scope and nature of these transgressions by stating:

“The systematic nature of war crimes conducted by Indian authorities against Kashmiri Muslims has been documented, but this report brings forward new evidence of complicity between Delhi and Tel Aviv within a broader context of security policies and rhetoric invoked by the Global War on Terrorism (GWOT). This complicity has not been exposed in such detail before, and our data is growing.”

The tense conflict in Kashmir has been ongoing for decades. This ground-breaking report seeks to highlight just some of the cases of human rights abuses and violence enacted by the Indian government, with the ultimate hope being to hold the perpetrators to account. See the full report here: India’s War Crimes In Kashmir – Violence, Dissent and the War On Terror

We pray that this legal investigation is a step in the right direction towards ending decades of oppression of Kashmiri Muslims.

[2] Indias War Crimes in Kashmir: Violence, Dissent, and The War on Terror