Infrared Security Cameras Instead of Electronic Body Scanners in al-Aqsa? 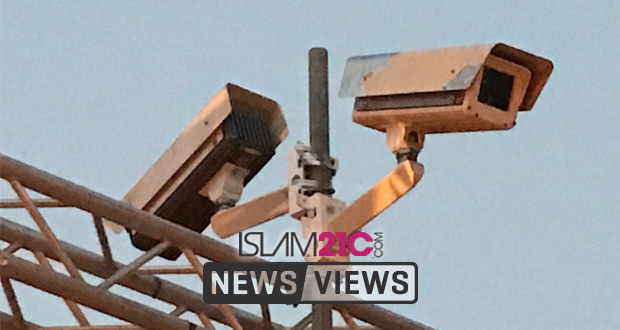 In the early hours of Sunday morning, Zionist Occupation Forces installed sophisticated security cameras overlooking Bāb al-Asbāt (Lion’s Gate); one of al-Masjid al-Aqsa’s entrances. According to reports, these cameras are akin to those used in airports, used to detect “terrorist activity” and intimate possessions, and can carry out detailed body scans through infrared technology.

The cameras were installed on metal poles leading to the Masjid, hours after Israel’s ‘Channel 2’ broadcast the force’s intent to remove the electronic body scanners situated at the Masjid’s entrances, replacing them with manual search routines. Zionist media sources have extensively discussed alternatives to the electronic gates such that to maintain the newest and unprecedented securitised status quo on the Masjid. Analysts have held that the ‘security measures’ seek to divide access to the Masjid between Muslims worshippers and Zionist extremists following increased violent intrusions, paving the way for more pronounced measures such as the physical splitting of the Mosque, similar to that imposed on the Ibrahimi Masjid in Hebron.

Hundreds of Palestinians observed the dawn Fajr prayers today at the Lion’s Gate and on the northern wall of the Masjid amidst a heightened presence of occupation forces following clashes with demonstrators during the hours of night. Thousands are continuing to flock to the Masjid in solidarity to express their rejection of the new measures.

A further two Palestinians were shot dead by occupation forces during clashes in the town of al-Eizariya (east of Jerusalem) and Abu Dis near to the occupied West Bank. Zionist forces have further arrested dozens across occupied Palestine, including 29 members of Hamas’ leadership in the West Bank. Of those arrested are Omar Abdel Razek, a member of the Legislative Council and the Minister of Finance of the Hamas Government, elected in 2006, as well as a number of former prisoners.

Friday the 21st of July saw protests in all of Palestine’s major cities for al-Masjid al-Aqsa, confronted by live gunfire that resulted in the killing of three Palestinians and the injuring of hundreds. This followed the closing of one of Islam’s greatest Mosques and barricading it with electronic gates.