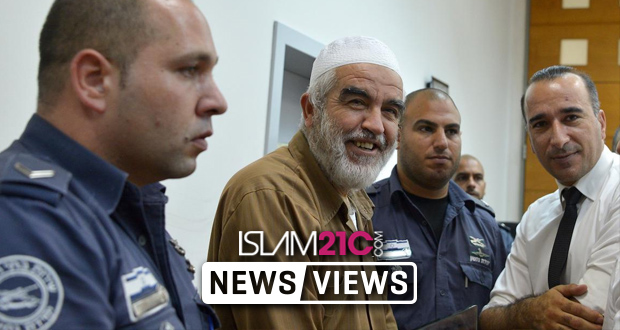 On Monday, The International Union of Muslim Scholars launched a campaign in Istanbul to support and demand the release of the imprisoned Palestinian leader, Sheikh Raed Salah.[1] This comes as a response to the arbitrary arrest and trial by the Israeli occupation of the Palestinian political leader.

The launch of the campaign was announced during a press conference that was held by the International Union of Muslim Scholars.

Sheikh Raed Salah is the leader of the Islamic Movement in ‘Israel’ and has been elected as the mayor in the city of Umm al-Fahm three times: in 1989, 1993 and 1997. Sheikh Salah was arrested and subsequently imprisoned by ‘Israeli’ officials in August of this year on charges of “inciting violence.”

Israeli occupation forces arrested Sheikh Salah from his home in Umm al-Fahm on 15th August, interrogating him and extending his detention several times.

The Israeli occupation accuses Sheikh Salah of “incitement” during speeches after the funeral of two Palestinians who attacked Israeli security forces in July at the courtyards of Masjid Al-Aqsa.

Sheikh Salah has denied the accusations, saying that they were protected under free speech laws and his speech was according to the teachings of the Qur’ān.

Sheikh Salah has been imprisoned in the past on multiple occasions by the Israeli occupation on various allegations and is currently undergoing a trial process as he is incarcerated.

The campaign being led by the Qatar-based International Union of Muslim Scholars consists of activists from Turkey, Lebanon, Jordan and Palestine.