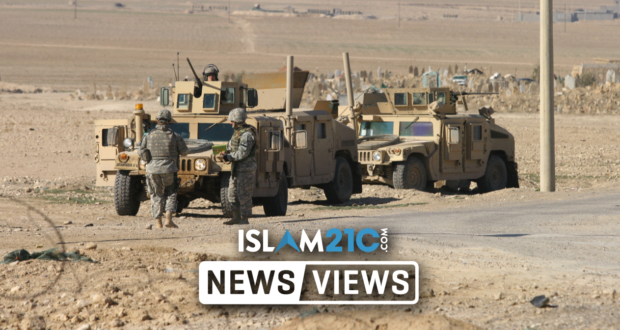 A new resolution passed by Iraq’s parliament has called for its government to expel foreign troops from the country amid tensions between Iran and US escalating after the killing of General Qasem Soleimani. [1]

The US strike against the military commander has fuelled discussions between Iraq’s Parliament today, calling for an end to the presence of foreign troops in Iraq, and to cancel its request for assistance from the US, working to fight the “so-called” Islamic State of Iraq and the Levant (ISIL).

“The government commits to revoke its request for assistance from the international coalition fighting Islamic State due to the end of military operations in Iraq and the achievement of victory.”

This comes after several reports mentioning the attack of two missiles on the Green Zone in Baghdad yesterday, which all comes one day after Iran’s most powerful military leader, General Qasem Soleimani, was killed in a US air strike in the Iraqi capital. [2]

The heavily fortified Green Zone, home to government buildings and several foreign missions, including the US Embassy, had rockets slammed into its base believed to be housing US troops. 1

Blasts also targeted the Balad air base, located 50 miles north of Baghdad, after which alarming sirens and surveillance drones were sent out above the base to locate the source of the rockets.

Reports from Baghdad, however, said that none of the projectiles landed inside the US embassy itself.

“According to Iraqi security forces, the projectiles landed in the celebration areas inside the Green Zone.” [3]

No casualties have yet been reported in the incident,[4] but the strikes have been attributed to as revenge for the killing of the Iranian Revolutionary Guards commander, General Qasem Soleimani.

Whilst some mourned the death of Soleimani, many others celebrated his death as the brutal General was responsible for countless atrocities committed in Syria, Iraq and Yemen. 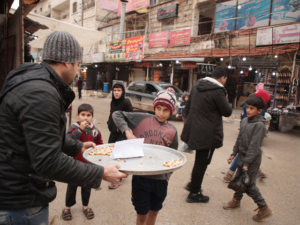 Syrians hand out sweets to celebrate the death of Qasem Soleimani.

Top Iraqi militia commander, Abu Mahdi al-Muhandis, also an adviser to Soleimani, was also killed in the attacks on Friday that came “at the direction” of President Donald Trump. 1

The US now fears a backlash against its bases across Iraq where its troops are deployed. The death of General Soleimani is proving to be a potential turning point in the geopolitics of the Middle East, amid Iran vowing a “harsh” response.

Javad Zarif, the foreign minister of Iran, hit out at the assassination of Soleimani, saying it is “an extremely dangerous and foolish escalation”.

The US bears responsibility for all consequences of its rogue adventurism.

Iran has been fastened to an ongoing conflict with the US that has intensified in recent times. Only last month, a US contractor working in northern Iraq was killed, prompting retaliatory US air strikes that killed 25 fighters close to Iran.

Iran’s supreme leader, Ayatollah Ali Khamenei, has promised “severe revenge” after the attack, while NATO has suspended its training mission for soldiers in the Iraqi army, saying that security concerns for its personnel were “paramount”.

2020-01-05
Hamza Saleem
Previous: Movers and Shakers
Next: Condolences to Sheikh Belal Assad and His Family