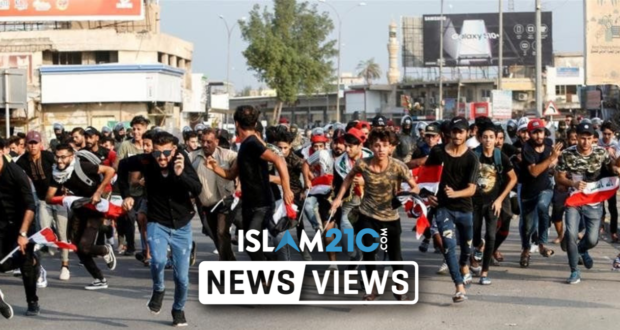 The streets of Iraq have been shaken by days of protests, as thousands of Iraqis took to the streets calling for an end to corruption and a change to the Iranian installed regime.

As protests continue, Iraqis have a clear message to Iran

The anti-government demonstrations have taken place in various parts of the country and are said to be against unemployment, poor public services and corruption.

The authorities have tightened security and have responded back indiscriminately by using tear gas, water cannons, rubber bullets and even live rounds.

After Egypt, mass protests have turned bloody & violent in Iraq. Has the process of reshaping the Middle East started through Arab Spring 2.0? #Iraq #BaghdadProtests pic.twitter.com/937iT0O4SP

According to the country’s parliamentary human rights commission, the death toll has sharply risen to almost 100 people. As well as protesters being killed, thousands have been wounded as the crisis deepens. In addition, a total of 540 protesters have been arrested during the unrest. 200 of whom remain in custody.

Tensions in the country continue to rise and further intensify as the authorities implement a near-total internet blackout. The authorities hope that this will prevent protesters from communicating and organising with one another. The blackout also limits the ability of demonstrators and journalists from reporting and posting footage of the crisis online.

A turn to the worse in #Iraq today. Day 4, Security shooting directly at protestors (check video from Baghdad).

In the hope of preventing protests from strengthening and gaining popularity, Prime Minister Adel Abdul Mahdi has imposed strict curfews in the capital, Baghdad and many other cities.

The Top United Nations official in Iraq, Jeanine Hennis-Plasschaert, has strongly condemned the violence saying it “must stop”.

The special representative of the UN secretary general in Iraq said that she was “deeply saddened by the senseless loss of life.” She further added that “those responsible for violence should be held to account.”

On Saturday afternoon, an emergency session of parliament was supposed to take place but failed to go ahead.

Nearly a year since he came to power, the protests are seen as the first major challenge to the Iraqi Prime Minister and his weak government.