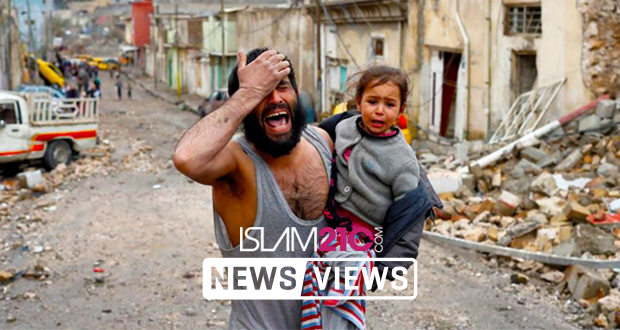 Iraqi Prime Minister Haider al-Abadi has approved requests from ‘Liwaa’ Ansaar Al-Marji’yah‘ to infiltrate 30km into Syrian territory, under the pretext of “fighting against ISIS”. This comes amidst the battle for Mosul coming to an end in which Iraqi forces backed by Shia militia have left utter carnage and devastation in the city.

In a report by Der Spiegel magazine titled ‘Not Heroes, But Monsters’, the country’s elite US-backed military was accused of indiscriminate murder, torture and rape with at least one nightly intrusion monitored by a US drone,[1] flying over the city. The ‘liberators’ are reported to have boasted about torture techniques learned from the Americans, “which included cutting the victim with a knife behind the ear”. Analysts have argued that the crimes perpetrated by the formal ‘Emergency Response Division’ are dwarfed in comparison to those committed by unregulated sectarian militia with reporting from the city extremely restricted. The US-led coalition has admitted to almost 500 civilian casualties, with more than 100 women and children killed in a single US attack on Mosul’s al-Jadida district last March. Independent monitors have put the figure at closer to 4000 since the unruly bombing campaign began in 2014.[2]

Al-Abadi’s approval, according to some observers reveals the primary impetus behind the ‘liberation’ of Mosul from ISIS, namely to facilitate a military corridor into Syrian territory, reinforcing sectarian strongholds and displacing Sunni residents. The militia, backed by Iran mentioned in its request to Al-Abadi that it is “part of the Hashd (‘Popular Mobilisation’) that works under the Iraqi Government, whilst the Baghdad Government is part of the International Coalition against Daesh (ISIS), which justifies Ansaar Al-Marji’yah’s request to pursue militants wherever they are.”

In the past few weeks, the ‘Popular Mobilisation’, now west of Mosul is around 80km from Iraq’s border with Syria, with the remaining area separating it from territories controlled by Syrian forces loyal to Bashar Al-Assad, the latter now advancing eastwards towards Iraq.