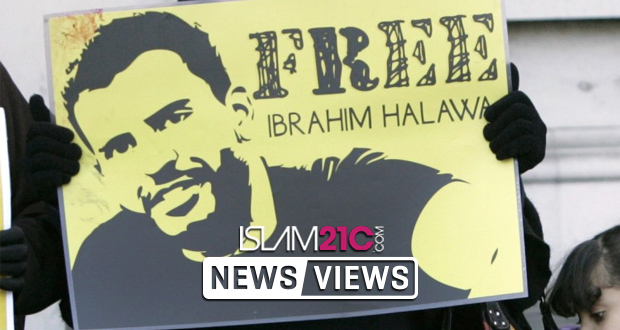 Irish Muslim Ibrahim Halawa imprisoned in Egypt for four years has been acquitted of all charges and is likely to return back to his family by this weekend according to reports, inshāAllāh.

The 21-year-old was arrested alongside hundreds of others during peaceful pro-democracy protest in 2013 when he was only 17 years old. Ibrahim, along with hundreds of thousands of Egyptians took to the streets to protest the ouster of Egypt’s first elected President Mohammad Morsi.[1] Ibrahim was detained along with his sisters Somaia, Omaima and Fatima by the military junta in a Masjid, although the sisters were released three months later. The Masjid where fellow protesters had taken refuge from the onslaught of the military was subjected to a raid by the military.

According to Ibrahim’s sister, Somaia Halawa who was in close contact with him, Ibrahim would reiterate that he had done nothing wrong and that he knows he should be proven innocent. But after four years in an Egyptian dungeon, much of which he spent in solitary confinement, “in a cell less than a metre square with no light and no toilet,”[2] whilst accused arbitrarily of ‘terrorism’ charges and told he would face the death penalty, the verdict came as a surprise. Many feared that he would be ‘judged’ in botched mass trails along with other protesters,[3] where many have been sentenced to death.[4] His court case for a mass trail had been adjourned 20 times in the past.

According to Human Rights group Reprieve who worked with Ibrahim and his family to secure his release, Ibrahim was detained alongside nearly 500 others, was beat by police,  denied medical treatment for a bullet wound to his hands and denied access to his lawyers.

“We couldn’t believe it. After all that suffering, it’s really come to the end. We don’t know when he’ll be released and when he’ll be home but I hope it will be soon. He has suffered a lot.”[5]

With the hope Ibrahim returns to his family in Dublin, more than 60,000 other political prisoners fill Egypt’s uninhabitable jails in appalling conditions. These Egyptian nationals, lacking the same limited political and legal advocacy, may never see the light of day or return to their families.

Abdel Fattah el Sisi’s coup regime continues to receive international recognition and support, despite its crackdown on activists exceeding the periods of repression during the Mubarak era, with summary arrests, executions and mass death sentences after what are widely described as sham trials.