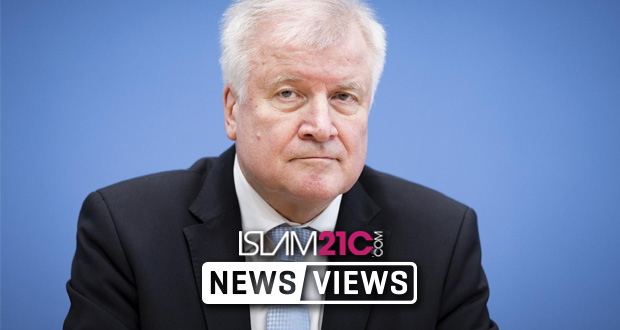 Amid a long history of coruscating tensions between Germany’s far right and the country’s Muslim minority, Horst’s obnoxious statement raises further questions on the government’s democratic and secular spirit. The new minister’s latest statement is in sharp contrast to that of Chancellor Angela Merkel’s disposition on the matter. Horst has always been quite articulate in his criticism of the Chancellor’s refugee policies. His recent assertion bears signs of political motivation since it is viewed as a ploy to lure the country’s far right.[1]

There has been a burgeoning rise in hate crime against Germany’s Muslim minority following the new categorisation termed ‘anti-Islamic offenses’. Through this the current administration purposely trivialises crimes against the community instead of bringing them under the broader purview of racial offense. Ever since this highly questionable move that took shape in 2017, a staggering 208 cases of racial crime against the Muslim community were registered throughout the country within the first quarter of its inception.[2]

Racial discrimination against the Muslim community is rapidly becoming a norm in German society. In a study published by the Institute for the Study of Labor, researcher Doris Weichselbaumer illustrates how the Muslim community faces inequity even in the employment sector. In her research, Doris sent 1,500 identical CVs to various German corporate houses and firms, some in the masquerade of the common German female name Sandra Bauer, and the rest in a visibly Islamic name Meryem Ozturk. Invitations were in the ratio of 18.8% (Sandra Bauer ) to 13.5% (Meryem Ozturk). Even more drastic is the fact that once Meryem’s photo revealed her in a headscarf, her invitation percentage dropped to 4.2%.[3]

“No. Islam does not belong to Germany. Germany is shaped by Christianity. The Muslims who live among us naturally belong to Germany […] That, of course, does not mean that we should, out of a false consideration for others, give up our traditions and customs. Muslims need to live with us, not next to us or against us.”

On being questioned about the Minister’s blatant averment, Chancellor Merkel in her official statement stated:

“There are 4 million Muslims living in Germany. They can live their religion here, too. These Muslims belong to Germany and in the same way their religion belongs to Germany, that is to say, Islam.”

The Chancellor also added that even though the traditional society of Germany was formed on the Judeo-Christian heritage, the country’s Muslims possessed every right to live as a part of German society and practice Islam while adhering to the nation’s constitution.[4]

Racial turmoil sparked in Germany after the Merkel Government’s 2015 decision to open its doors to more than a million Syrian immigrants fleeing their homeland following the grave civil crisis. The move agitated Germany’s far-right, which sought to sanction the decision and plans to score political mileage over the situation.