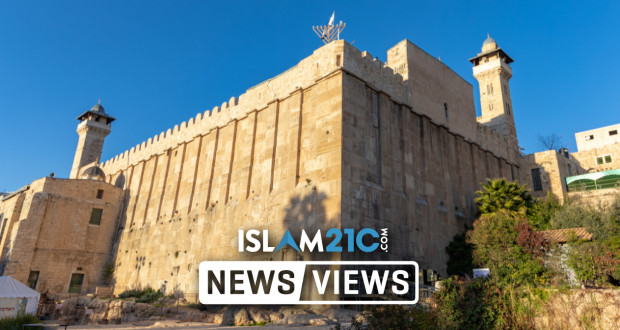 The Zionist state of ‘Israel’ has begun renovation efforts to strip the iconic Ibrahimi Mosque of its remaining Islamic heritage. Plans have already been drawn to install an external lift, a parking lot, and a route for pedestrians to pass through the site. This latest development comes despite strong opposition from Palestinians, who frequently attend the place of prayer. An incredible number – estimated to be between 15,000 to 20,000 worshippers – attended the mosque’s Friday prayers on August 13 alone. [1] [2]

The Ibrahimi Mosque is situated in Hebron, which is approximately 19 miles south of the contested city of Jerusalem. This is where the graves of the Prophets Yūsuf, Ibrāhīm, Yaʿqūb, and Isḥāq (ʿalayhim al-Salām) are located. The city of Hebron is home to around 160,000 Muslims and 500 Israeli settlers. Despite this disparity, the site of the Ibrahimi Mosque has significant importance amongst both Muslims and Jews, and has been a contentious spot for the two Abrahamic faith groups. At present, the site is split in order to accommodate both Jews and Muslims, with bulletproof walls placed in order to divide the two halves. All worshippers at the site are required to pass through Israeli security checkpoints on arrival. [3]

During the month of Ramadan in February 1994, the mosque was the scene of an unspeakable massacre, where 29 people were killed and 125 were injured. While worshippers prayed in congregation, US-born Israeli physician Baruch Goldstein walked in and proceeded to fire multiple rounds from his Galil assault rifle. [4]

Jewish extremists view Goldstein as a hero, with a plaque near his grave stating:

“To the holy Baruch Goldstein, who gave his life for the Jewish people, the Torah and the nation of Israel”. [4]

Thousands upon thousands have visited the terrorist’s grave since the 1994 mass murders. [4]

Concerning the recent renovation plans, Palestine’s Ministry of Endowments and Religious Affairs was critical in its remarks by stating:

“The decision is an assault on the Muslims’ ownership of the Ibrahimi Mosque and the endowments that surround it, which are numerous in the city of Hebron.” [5]

In late December 2020, ‘Israel’ approved plans to seize land belonging to the Mosque in order to make way for settlement-building purposes. The Israeli attorney general Avichai Mendelbit has also authorised the land seizure. In response, the Palestinian Ministry of Endowments has argued that these measures are being undertaken in order to “Judaize” the mosque. [6]

News of the imminent renovation works comes just after important developments occurred during the August 13 Friday prayers. Israeli occupation forces targeted Palestinian worshippers who had come out in droves to make a stand against the apartheid state’s intended redevelopment project. The use of “sound bombs” during that week’s Jumuʿah prayers was well documented. Despite these counter-measures, the event was attended by thousands after people heeded calls by the Ministry of Endowments and Religious Affairs to join prayers in solidarity against ‘Israel’’s plans. In addition, Shaykh Hefzy Abu Sneina, the director of the Ibrahimi Mosque, said that tear gas was also used by Israeli troops to disperse worshippers. [6]

“Sound bombs” are a notorious weapon frequently utilised by the apartheid forces to attack Palestinians; they cause deafness, heart problems, bedwetting, muscle spasms, trauma, and most disturbingly, miscarriages. The bombs are proverbially ‘released’ when Israeli military jets fly low to the ground and at tremendous speeds in excess of 750 miles per hour. These create sonic booms, where the sound barrier is broken, thus producing a violent cracking sound that causes glass to shatter and walls to fracture. A 2005 article in The Irish Times noted Palestinians describing such bombs as being akin to earthquakes. One Palestinian shop owner by the name of Tareq Dayyeh was quoted as saying:

“I have never heard such a loud explosion. I thought it was right over the top of my building. Sometimes you hear the rockets the Israelis fire but this was different. I felt like I was in the middle of a bomb. When I ran out the door I thought I might find the rest of the street was gone.” [7]

The late Dr Eyad El Sarraj, a Palestinian psychiatrist and founder and director of the Gaza Community Mental Health Programme, said of the sonic booms or “sound bombs”:

“The stress that is caused is phenomenal. The Israelis do it after midnight and then every one or two hours. You try to go to sleep and then there’s another one. When it happens night after night you become exhausted. You get a heightened sense of alert, waiting continuously for it to happen. People suffer hypertension, fatigue, sleeplessness.

“For children, the loud noise means danger. Adults may know it’s only a sound but small children feel threatened. They are crying and clinging to their parents. Afterwards they are dazed and fearful, waiting for something to happen.” [7]