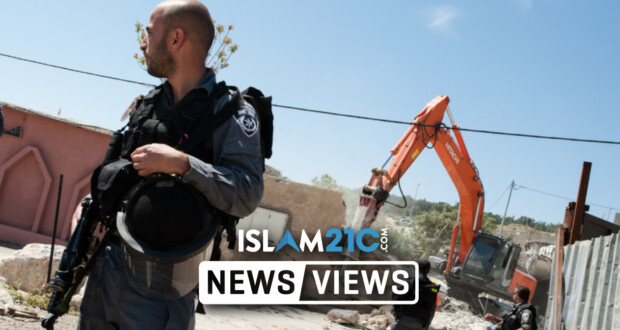 The Israeli occupation forces (IOF) have levelled a Palestinian Bedouin village in the occupied West Bank for the second time in three months.

According to B’Tselem – the human rights group that documents IOF abuses against Palestinians – military personnel entered the village of Khirbet Humsah on Monday morning, dismantling tents and confiscating possessions belonging to the residents. On Wednesday, a bulldozer accompanied by soldiers began knocking down village infrastructure.[1]

An unnamed spokesman from the military attempted to cover up the demolition and forcible transfer of the Palestinian villagers, saying that residents had “voluntarily agreed” [1] to move after engaging in “dialogue” [1] with the military.

A statement by B’Tselem notes:

“Yet when one side – Israel – has all power and can threaten defenseless Palestinians with demolition orders, bulldozers and weapons, consent is not on the cards.”

“Rather, it is an act of coercion and violence by Israel’s apartheid regime, which advances the principle of Jewish supremacy by geographically and demographically engineering space.” [1]

During the demolition, thirteen tents that housed 11 families (consisting of 74 members, including 41 minors) were confiscated, as well as five shacks and eight tents that were used for livestock.

The IOF says that the village had been constructed illegally on a firing range, but according to B’Tselem, the IOF had not trained in the area for the last seven years. The village had previously been demolished in November last year.

“As in other parts of the West Bank, these areas were declared “firing zones” in order to drive local residents out of their homes and take over their land”, [1] B’Tselem wrote in their statement, adding that local occupation councils do not disguise the true intentions of the military.

“Unlike the military, the local settlement council made no attempt to disguise the intention to expel Palestinians for alleged security reasons. In a statement sent to Jewish residents, it welcomed the training as “another way to increase governance and control over open space and to enforce law and order”, [1] the group added.

Khirbet Humasah’s residents, which number up to 130 inhabitants, have vowed to remain on their land, with many sleeping on mattresses and plastic tarps that offer no cover during the day and night.

Ibrahim Abu Awad, one of the residents, said, “We will not move from here, we will stay here. If they demolish, we will rebuild.”[2]

The destruction of Khirbet Humsah on Wednesday follows the demolition of a mosque in the village of Umm Qusah in January last month. Several other structures were also destroyed in addition to the mosque, which was under construction.

“This is a crime and a blatant attack on Muslims’ feelings,”[3] said Hussam Abu al-Rub, the Palestinian acting minister of religious affairs in occupied Palestine.

These policies, which include demolitions, cutting off of water and electricity supplies, and harassing residents, have made living conditions for many of these communities miserable and intolerable, and are aimed at forcing the residents to leave.

Furthermore, the IOF states that Palestinians must acquire permits in order to construct their homes. However, such permits are incredibly difficult to obtain, and most requests go unanswered or are rejected.

2021-02-04
Muhammad Mussa
Previous: Aung San Suu Kyi charged and detained by police
Next: UK, US, and Australia aghast at reports of systematic rape of Uyghurs