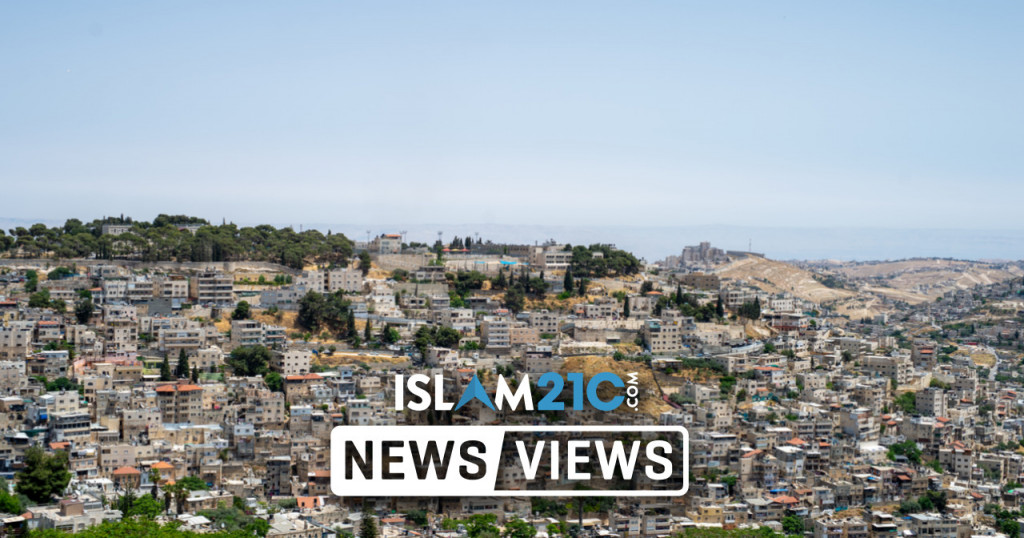 The Norwegian Refugee Council (NRC) has warned that at least fifteen Palestinian families are at immediate risk of becoming homeless in a district situated in occupied East Jerusalem. A number of units situated in the al-Bustan area of Silwan district are under immediate threat of destruction. The risk is starting to become a sobering reality after the apartheid state of ‘Israel’ commenced illegal demolition works in the locality on Tuesday. [1]

“Israeli authorities must immediately stop forcibly displacing people and demolishing their homes and property…Under the Fourth Geneva Convention, Israel has an obligation to protect civilians under its occupation and to refrain from destroying private property.” [2]

Moreover, Ort asked the international community to take decisive measures to “prevent the forcible displacement of Palestinian families and demand Israel ceases advancing settlements in East Jerusalem that cause irreparable damage to the prospects for a viable Palestinian state and the resolution of the question of Jerusalem.” [2]

While the call to prayer was being made nearby, tragic scenes shared on social media displayed a building being brought down by Israeli bulldozers in the area of al-Bustan. The district is situated south of the Old City of Jerusalem, and has a population of approximately 1,550. The small community has lived in fear since 2005, when it first faced potential demolition orders. Today, it is reeling from the wholly unjust and illegal razing of homes belonging to over a dozen families.

Prior to the commencement of the demolitions, Palestinian families in al-Bustan had incredulously been given 21 days to demolish their own homes. As a result of this order, some families have had no choice but to take part in the destruction of their own properties. This is done in order to avoid being ‘fined’ $6,000, a hefty fee which is imposed if Israeli bulldozers are needed to raze the buildings. To add insult to injury, illegal Jewish settlers have unilaterally declared the area of al-Bustan to be an “open” space. In addition, they have banned all construction projects, and even denied the native population of having the legal right to call the town their home.

The Oslo-based NRC, which was formed in 1946 and presently employs over 15,000 staff members, has been providing legal support in 93 cases regarding al-Bustan. A few days ago, a local Israeli court stayed the demolition decrees for 52 properties. On the other hand, 16 properties, which included a butcher shop, had their demolition orders approved. On the same day that the initial work for the destruction of these 16 properties began, the NRC cautioned that the area of al-Bustan represents only a small fraction of Palestinians at risk of internal displacement. The NRC’s statement presented the following statistics concerning this matter:

“More than 100,000 Palestinian residents of East Jerusalem are at risk of displacement, according to the UN Office for the Coordination of Humanitarian Affairs (OCHA), and around 330,000 face a lack of infrastructure and severe housing shortages because of discriminatory Israeli planning and zoning policies.” [2]

The Palestinian young man Mohammad Seyam self demolish his store in Silwan village, to avoid paying 20,000 NIS demolition fines, following the order of occupation municipality of Jerusalem under the pretext of building without permit. #SavePalestine #SaveJerusalem #SaveSilwan pic.twitter.com/NYAj1hpyM9

‘Israel’’s new government has only been in place since mid-June, when former Prime Minister Benjamin Netanyahu was unable to establish an administration after the latest round of elections. The new coalition government is headed by the extreme hardliner Naftali Bennett, who once made the following chilling remark:

With the inception of the new coalition government, there has been no cessation of hostilities against the Palestinians. In fact, the Jerusalem Municipality has already boastfully changed the district’s Arabic name al-Bustan to the Hebrew Gan Hamelekh, which means “The King’s Garden”. The Zionist state claims that the area was once a garden for Israelite kings several thousand years ago. [4]

While residents attempted to protest against the demolitions, police fired tear gas and rubber bullets, injuring 13 people. The owner of the demolished butcher shop, Nidal al-Rajabi, told Middle East Eye that Israeli occupation forces had beaten residents with sticks. He mentioned that police forces even detained many individuals, including his son and brothers. [5]

The Israeli occupation of the Palestinian lands continues unabated. During this brutal ordeal, one cannot remain silent when witnessing the sheer hypocrisy of the occupiers, who somehow believe that they have the right to ‘ban’ Palestinians from building on land that is rightfully theirs.