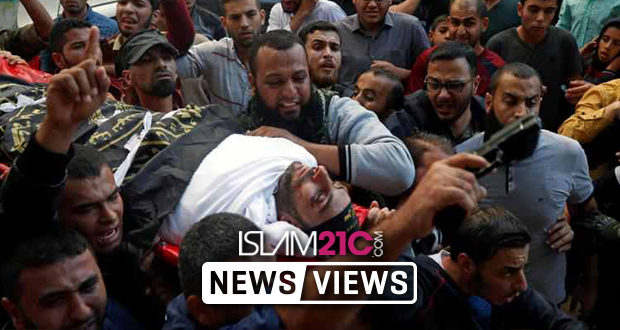 “Masses” of Palestinians attended the funeral processions today of several well-known figures within the Palestinian resistance movement. Seven men from different organisations were killed yesterday in an unprovoked Israeli aerial bombing that targeting a tunnel operated by the resistance east of Khan Yunis in southern Gaza Strip.[1]

Hundreds of Palestinians attended funeral prayers on the bodies of Arafat, the guide to leader of the Al-Quds Brigades, and members Hassan Abu Hassanin and Ahmed Abu Armanah in the Grand Mosque in Al-Bureij refugee camp in central Gaza Strip. Similar funerals took place for the bodies of Mesbah Shbeir and Mohammad al-Agha from the Qassam Brigades in the Ahl al-Sunna Mosque in Khan Younis, southern Gaza.

Two separate funeral prayers were also held on the bodies of the two Al-Quds Brigades members of the resistance, Omar al-Falit and Hussam al-Sumairi, in mosques closer to their homes. The bodies roamed the streets of Gaza before being hastily buried in fulfilment of Islamic guidelines.

Leaders of the Palestinian factions also participated in the funeral processions, alongside mourners chanting slogans demanding a like-for-like military response to the unprovoked assault.

The Head of the Political Bureau of the Islamic Resistance Movement “Hamas”, Ismail Haniyeh, asserted that the occupation will fail in imposing new rules and ‘mixing cards’, stressing that the resistance’s weapons are not up for negotiation, before calling on the Palestinian Authority to halt all security coordination with the Zionist occupation adding that “our will is strong and our swords are unsheathed, and whoever thinks they can mix cards or force a change to priorities, especially the resistance and its weapons is merely fantasising.”

The assault coincides with celebrations in the United Kingdom marking the centenary of the Balfour Declaration which is seen as the main catalyst and authorisation for the Zionist occupation of Palestine.