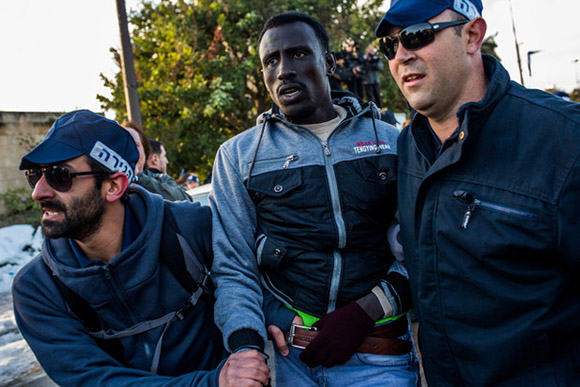 In a shocking outburst, one of Israel’s leading Rabbis during his weekly sermon used the Hebrew equivalent of the N-word and went on to describe a black person as a “monkey”.

Despite the grotesque and overtly racist language used by Rabbi Yitzchak Yousef, he has only faced very mild censure. A New York City-based organisation devoted to battling anti-Semitism and racism described it as “racially charged” with the Chief Rabbi’s office stating he was merely citing a passage from the Talmud. “Israel” has two chief Rabbis, with Rabbi Yousef representing Sephardic Jews of Middle Eastern and North African descent.[1] Rabbi Yousef’s counterpart, Chief Rabbi Yisrael Lau also used the Hebrew N-word on his first day in office in reference to black athletes.[2]

Chief Rabbi Yousef is a controversial figure by western standards, previously stating that all non-Jews could only live in “Israel” if they agreed to serve the country’s Jewish population.[3]

The Chief Rabbi’s statements have been viewed in the context of Israeli treatment of black refugees. Whilst “Israel” has opened its arms to white Jewish immigrants from countries such as the USA which have (until recently) been lauded for the freedom and respect afforded for civil liberties, it has chosen to expel African refugees. Support, it seems, exists among ordinary Israeli citizens, with a recent poll showing 69% support the deportation of African asylum seekers, up by 8% from a previous poll taken four years ago.[4] This poll worryingly suggests the problem of racism in Israeli society is actually becoming worse, rather than improving.

Prime Minister of “Israel”, the self-declared “only democracy in the Middle East”, has pressed ahead with the racist policy of forcible deportation of thousands of African asylum seekers, despite warnings of “incalculable” damage to Israel’s reputation from prominent pro-Israel commentators including Abraham Foxman and Alan Dershowitz.[5]  Some may argue, however, that supporters of “Israel” should be less concerned about Israel’s reputation and more concerned about the moral integrity of Israel’s treatment of its fellow man, no matter what colour.

However, these Jewish-American voices have been described as too little too late. Where was the condemnation of the Israeli government rounding up thousands of black refugees into desert detention centres, before forcibly removing them from the country altogether over the past 5 years?[6]

On Monday, Netanyahu agreed a deal with the UN refugee agency to send 16,000 African refugees to western countries such as Canada, Italy and Germany, rather than force them to choose between indefinite detention or forced expulsion. However, Netanyahu made a stunning U-turn and reversed his decision only a few hours later. The Prime Minister it seems, capitulated to right wing pressure which could not stomach a deal which saw Israel accept one black refugee in exchange for sending another abroad. Some Israeli politicians have called these black asylum seekers “infiltrators” with one going so far as to call them a “cancer” threatening the country’s Jewish character. [8]

Some have pointed out that this is not surprising when it comes to “Israel”, as racism is present within its law with existing racist policies making this apparent. Inequality and discrimination in “Israel” is institutionalised and well established. This is evident as full equality is not existent between Jewish and Palestinian citizens. The Association for Civil Rights in “Israel” itself states that: [9]

“the right to equality is not yet enshrined in law regarding most aspects of life.”

“Equality cannot be recognised on the constitutional level,” as this would challenge “the inequality created by the complete identification of the state with only one group.”

Whilst “Israel” rails against the comparisons made to Apartheid-era South Africa, it is clear that, just as in that society, racism against black people has reared its ugly head in “Israel”.

APARTHEID DISCRIMINATION ISRAEL RACISM RACIST
Share. Facebook Twitter LinkedIn Email Telegram WhatsApp
Previous ArticleCould YOU be to Blame for the State of the Ummah?
Next Article Corbyn haters seem happy to be anti-Semitic to prove he is