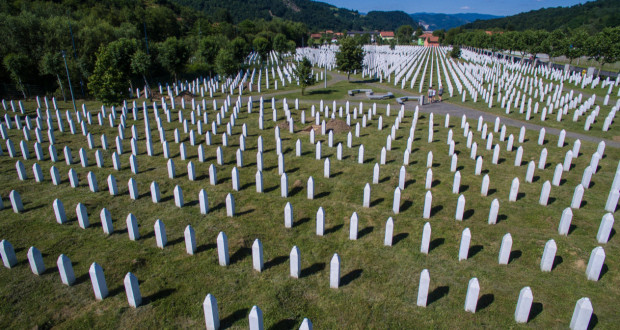 An Israeli Holocaust specialist has been slammed after sources reveal that he led a 1000-page report that downplays the massacre of 11-22 July 1995, when Serbian troops under the orders of General Ratko Mladic launched an offensive in Srebrenica. In the report, the authors claim that no more than 3,000 “military prisoners including several hundred male civilians” were killed in Srebrenica. Appallingly, in actual fact the blood of over 8,000 Muslim men and boys was spilt, as troops deliberately engaged in what the then UN Secretary-General Kofi Annan aptly described as “a terrible crime – the worst on European soil since the Second World War”. Unbelievably, in early November, Dr. Gideon Greif was due to be honoured by the German President Frank-Walter Steinmeier for services to Holocaust research. However, following heavy criticism of Greif from all arenas, including prominent Bosnians as well as Jewish leaders, the bestowment of the Order of Merit has been postponed for the foreseeable future. [1] [2] [3] [4]

Greif is an expert on the Holocaust, particularly the history of the Auschwitz concentration camp. However, he has raised eyebrows after releasing a July study entitled the Independent International Commission of Inquiry on the Sufferings of All People in the Srebrenica region between 1992 and 1995. Critics of the report have decried it as an Islamophobic “piece of propaganda”. [1]

This is in fact the contention of Marko Attila Hoare, a Balkan historian and associate professor at the Sarajevo School of Science of Technology. Hoare told Al Jazeera that such beliefs espoused by a recognised authority on the Holocaust was “a betrayal of academic principles by an academic for political and mercenary reasons”. [1]

“It is a piece of propaganda that serves the political goals of the extreme nationalist regime of Milorad Dodik, which heads the Republika Srpska entity that was founded on genocide and that has an obvious interest in denying this genocide.” [1]

Moreover, Emir Suljagic, the director of the Srebrenica Memorial Centre, told Al Jazeera that the report “in its entirety is a collection of falsehoods and Serb extremists’ talking points that we’ve been hearing over the years”. [1]

“It is simply sad how Greif allowed himself to be manipulated and lose all credibility by an apartheid regime that pursues genocide denial as a policy.” [1]

The Holocaust resulted in the tragic murder of an estimated six million European Jews. It continues to draw a long shadow in Germany, as the country attempts to fully move on from the horrific acts perpetrated by Nazi leader Adolf Hitler and the Third Reich. Indeed, there remain surviving members of the Schutzstaffel (SS) – the main paramilitary group under the command of Hitler during World War II – who are on trial for war crimes, well into the 21st century.

Josef S, a 101-year-old former SS guard, has only recently gone on trial. He has been charged as an accessory in the murders of 3,518 prisoners between the years 1942 and 1945 at the Sachsenhausen camp in Oranienburg, which lies approximately 20 miles north of Berlin. The ongoing October 2021 trial of the centenarian is the latest in a long list of cases, where former Nazi guards are being brought to justice, sometimes over 80 years following the end of the Second World War. Josef S, whose full name has not been disclosed under Germany’s strict privacy laws, is accused of complicity in the “execution by firing squad of Soviet prisoners of war in 1942”, in addition to the murder of prisoners “using the poisonous gas Zyklon B”. [5] [6]

A survivor of the Sachsenhausen, Auschwitz, and Buchenwald camps, 100-year-old Leon Schwarzbaum attended the trial as an observer. He told the German Press Agency (dpa):

“This is the last trial for my friends, acquaintances and my loved ones who were murdered, in which the last guilty person can still be sentenced – hopefully.” [5]

In 2020, a 93-year-old former SS guard was convicted of being an accessory to the murders of a staggering 5,232 prisoners. The guard had worked at the Stutthof concentration camp, which was located around 22 miles east of the city of Danzig. Forty survivors and descendants of victims acted as co-plaintiffs in the trial, which resulted in the accused – Bruno D. – denying responsibility for his actions. He was handed a suspended sentence of two years. [7]

Nearly a hundred years on, former Nazi guards are still being put to trial for their involvement in one of the most horrific genocides in history. Yet this very finding begs a fundamental question: how can a learned man of 70 years of age deny the Srebrenica holocaust, whilst being an expert in that of Nazi Germany?

Thousands of women – mothers, grandmothers, sisters, daughters, aunts, and nieces – continue to relive the harrowing events of July 1995. 2020 marked the 25th anniversary of the slaughter of the roughly 8,000 Bosniak men and boys. Ramiza Gurdić lost her husband, 2 sons, and 33 family members during the genocide. She recounted her story to the UK-based Remembering Srebrenica charity:

Perhaps most tragic of all is the fact that bodies of victims are still being uncovered over 26 years on from the atrocities of the 1990s. On 11 July 2021, the remains of 19 victims were laid to rest, as Muslims around the world marked the 26th anniversary of the worst crime committed on European soil since World War II. The added pain in knowing that many victims were buried in mass graves, disinterred, and then reburied once again in an attempt to hide evidence of the genocide is palpable. [8]

If Greif denies that the Srebrenica massacre occurred, what does he have to say about the mass rapes of approximately 50,000 Bosnian Muslim women? Systematically raped by Serbian soldiers between 1992 and 1995, the destruction of dignity and any inkling of humanity is surely undeniable. [9] In Seada Vranic’s 1996 book on the horrific use of rape by Serbian forces in Bosnia-Herzegovina, a truly graphic example is given amongst dozens of others.

“Instead of a blindfold, the Serb soldiers bound Enisa’s eyes with their socks. The stench made her throw up, so they hit her until she learned that ‘Serb socks don’t smell’. Seven ‘heroes of the nation’ raped and beat her for days.

“At first she resisted, so they brought her to her senses by knocking her teeth out with a rifle-butt, and breaking her jaw. When she lost consciousness, they would ‘give her a bath’, i.e. douse her in cold water.

“Terrified that she would be driven mad, she suddenly liked the idea and saw madness as a way out. She began singing Serb songs louder and louder, then dancing with the Chetnik who had presumably butchered her husband. The soldiers were dumbfounded. They threatened her, held a knife to her throat, but she only sang louder. Believing she had gone off her head entirely, the soldiers paid less attention to her and she managed to escape, by hiding in a potato sack.” [10]

“As the son of two survivors of Auschwitz and Bergen-Belsen who were deeply committed to transmitting to future generations evidence of the crimes perpetrated against European Jewry during the Holocaust, I am especially appalled by the report’s shameless manipulation of the truth. It is a document that deserves to be consigned to the dustbin of history, used only to demonstrate the moral failing of individuals — the proverbial ‘useful idiots,’ as it were — who engage in genocide denial and distortion.” [11]

“The report is an embarrassment to scholarship and flies in the face of the established record in international law. In addition to being a legal and factual abomination, it blatantly ignores one judgment after another by the United Nations International Criminal Tribunal for the Former Yugoslavia (ICTY). The commission instead props its report heavily on one dissenting trial opinion in an early ICTY case. It also depicts as gospel the writings of largely discredited Srebrenica genocide deniers, without addressing the writings of historians and legal scholars who have reached diametrically different conclusions.” [11]

Bosnia and Herzegovina is currently in the midst of a political crisis which raises the risk of an armed conflict igniting, only a quarter of a century on from the last. Milorad Dodik, the Serb member of Bosnia’s tripartite presidency, has declared that the country’s Serb-run entity – the Republika Srpska – will leave key state institutions. Dodik is implementing this bold move in order to achieve full autonomy within the country, which runs in violation of the 1995 Dayton Peace Agreement. The planned move risks stirring up ethnic tensions between Serbs and Bosnians. But as of yet, no clear solution has been reached. [12]